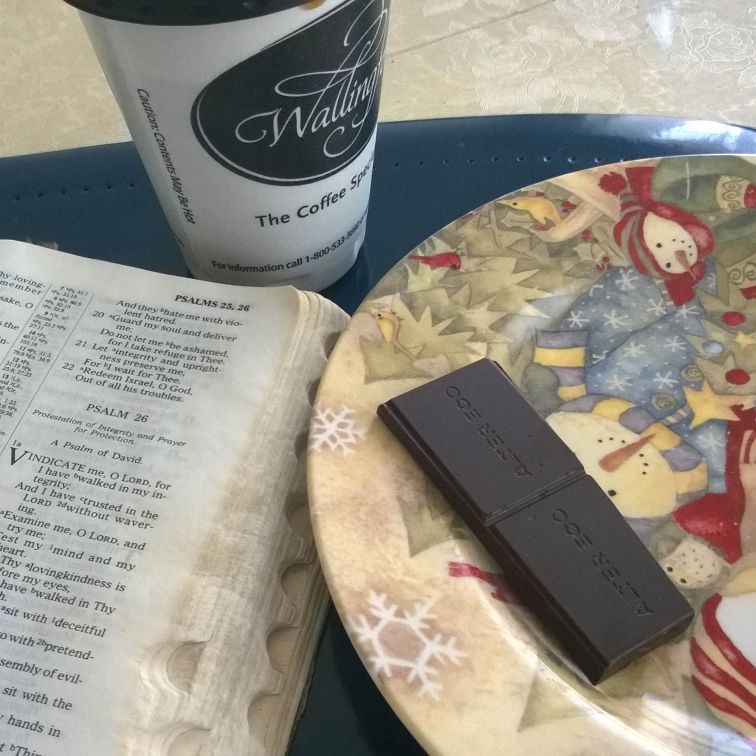 Today’s chocolate: Alter Eco Blackout Dark Chocolate and a cup of coffee from the gas station down the street, because coffee

I’m noticing something: a recurring theme in David’s psalms is that he’s one of the good guys. You read a psalm like this, it’s like listening to one of those rap songs where the rapper brags about how great he is for four minutes. There’s a key difference, though: those rappers brag about how tight their flows are, how much wealth they own, how many women they have casual sex with, and how frequently they abuse controlled substances. What does David brag about? His integrity, his love for God, and his eschewal of alliance with evildoers.

David kicks it off with a request. He prays: “Vindicate me, O Lord, for I have walked in my integrity, and I have trusted in the Lord without wavering” (1), and a few verses later, he states, “I have walked in Your truth” (3). For David, you can’t separate being a good guy from obeying God. Moral truth belongs to God, its originator, and he created humans to live their lives in it. This is David’s integrity: holding together by holding to God’s law.

The second half of David’s opening prayer shows another facet of being a good guy: trust in God motivated by love. Why does he request God to vindicate him? Because he has “trusted in the Lord without wavering” (1). Merely following the rules isn’t what God is looking for, so it’s not David’s game. He goes one further, saying, “Your lovingkindness is before my eyes” (3) and “I will go about Your altar, O Lord, that I may proclaim with the voice of thanksgiving and declare all Your wonders” (6-7)”. David loves God’s love, he loves God’s presence in his house, and he’s grateful for God’s wonders. Sure, he follows the rules, but the relationship goes further than authoritarianism. It’s friendship and admiration.

Finally, David’s way of being a good guy manifests itself in the crew he rolls with. I know I sound like a youth pastor trying to sound hip, but whatever; I think the juxtaposition of urban slang and my own nerdiness is hilarious. My point is that David rejects the company of liars and violent men: “I do not sit with deceitful men, nor will I go with pretenders” (4). You won’t find David where evildoers gather and make their plans. If there’s one group he’ll associate with, it’s the congregations from verse twelve, where he’s free to bless the Lord.

Whenever you’re talking about “being a good guy,” though, I think it’s important to bear in mind the ultimate foundation for moral goodness. It’s much easier to believe you’re a good person than it is to be a good person. And being a good person is only possible because of the God who created a moral universe, gave humans the free will to choose good or evil, and–if they repent–will gladly rescue those who are mired in their own self-created wickedness.