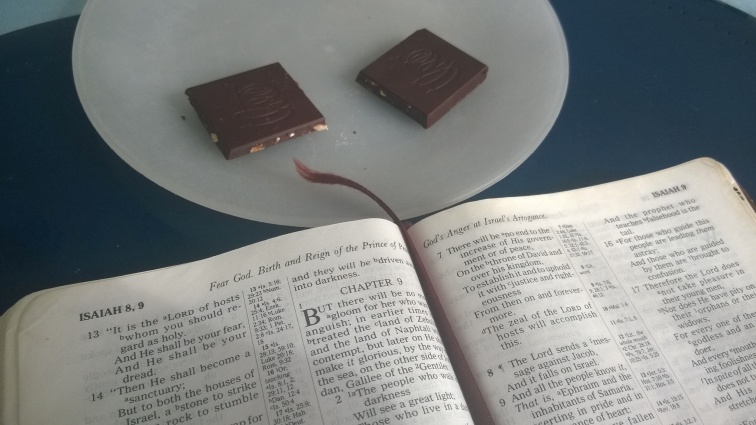 I like music. You know that, not only because everyone likes music, but also because I’m constantly sharing music on this blog that is ostensibly about the Bible. But did you know that, in addition to Christian rock from the 90s, I also enjoy classical music? I can’t read this passage from Isaiah without thinking of the section of Handel’s Messiah that sets it to music. Let’s let the London Symphony Orchestra perform it for us on Youtube, shall we? That’s the ticket.

As Handel indicates with the title of his oratorio, here we have a Messianic prophecy. Isaiah tells us, “For a child will be born to us, a son will be given to us, and the government will rest on His shoulders” (9:6). The Israel of Isaiah’s time may be mired in sin and headed for calamity, but after the dark night of judgment there’s the dawning of a new day. The Messiah will reign from the throne of David, bringing everlasting peace, justice, and righteousness to his kingdom (9:7). He will liberate his people and usher in an age of uninterrupted prosperity.

As the Jewish understanding of the Messiah developed through the time of the prophets, there was by no means consensus or expectation that the Messiah would be a divine figure (“Mashiach: The Messiah,” Judaism 101). Judaism remained committed to worshipping the one God who created man and the universe, and it was generally unthinkable that God could be a man, with flesh and bone–which is one reason why Jesus, despite veiling his allusions to his deity in symbolic language and circumlocution, ended up on the cross. But as I read Isaiah 9 today, one name in the litany of Messianic names hit me: “And His name will be called Wonderful Counselor, Mighty God, Eternal Father, Prince of Peace” (9:6). As noted before, the Messiah will be a child who is born, and he will also be God. That’s the Hebrew el in the text there, and there is hardly a better translation for it than “god” or “deity.” The child will be the Father.

There’s some more good stuff in there too. Triumphant heathens! Burning unrelenting rage against widows and orphans! Cannibalism!