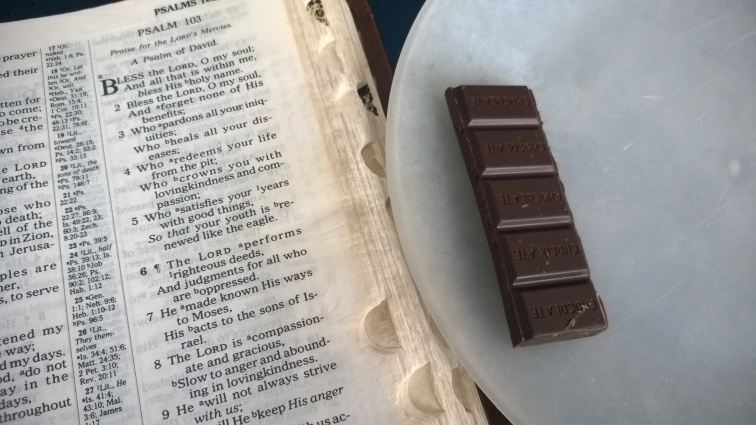 I’ve been having the hardest time writing Thursday’s post, as is evidenced by the fact that it’s technically Friday. Fortunately, though, this psalm is about forgiveness.

Sometimes I look at the text of the day and think to myself, “What could I add to this?” These words have been around for centuries, reminding people: God is forgiving. When you botch the job, he will clean up after you. He still loves you even after all that stupid stuff you did. You can stop beating yourself up. Just look at these verses:

The Lord is compassionate and gracious,
Slow to anger and abounding in lovingkindness.
He will not always strive with us,
Nor will He keep His anger forever.
He has not dealt with us according to our sins,
Nor rewarded us according to our iniquities.
For as high as the heavens are above the earth,
So great is His lovingkindness toward those who fear Him.
As far as the east is from the west,
So far has He removed our transgressions from us. (103:8-12)

Seriously, look at those verses! I keep typing out sentence after sentence trying to say meaningful stuff about them, but I keep backspacing my words because the meaning is already there. God has not dealt with us according to our sins. He took our transgressions from where we are and placed them in the most where-we-aren’t place possible. He put them on the cross. He put them through the hands of Jesus Christ.

So I don’t really have any words to add to these words. But I can point to some other words in another place in the Bible that are similar to these words. While reading this psalm (which, incidentally, attributes its authorship to David in the epigraph), I felt an odd feeling that Isaiah speaks about God’s forgiveness in similar terms. With a search, I dug up this verse: “For I will not contend forever, nor will I always be angry” (Isaiah 57:16). It’s about as identical to Psalm 103:9 as they come. What is God always? The answer isn’t “angry.” It’s “loving.” David knew it, and so did Isaiah.

That’s all I’ve got. Well, except for a dumb joke, but I’ll spare you the dumb joke. Tune in tomorrow, which is actually today. Tune in…I don’t know, man, it’s late. God is forgiving, good night.