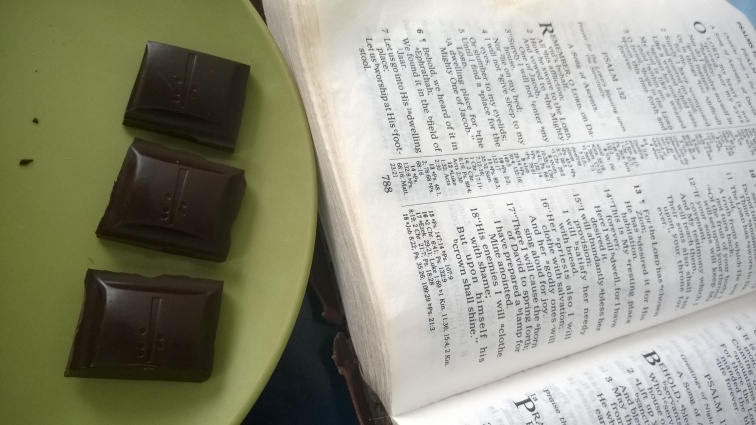 Let’s take a look around the circle. There’s you. There’s me. There’s an English translation of an ancient Hebrew song of worship, there’s a memory of King David, and there’s God in the center of the circle. And now that we know who all’s here for the post, we can begin.

King David left a legacy for the Jewish people, and as important as he is in Christianity, I only have a cursory sense of his significance in Judaism. He’s here in this psalm, even though it doesn’t identify its author. Considering that it’s a “Prayer for the Lord’s Blessing upon the Sanctuary,” as the NASB identifies it, and that the Temple was constructed under the reign of David’s son Solomon, I infer that this psalm was composed sometime after David’s death. But even after death, his presence makes itself known in the song.

Here’s the thing: David cared strongly about singing and about God. He had a vision for a temple in which the Jewish people could worship God, and he penned songs of praise so that his people could sing to God for generations. This psalm states his vow: “I will not give sleep to my eyes…until I find a place for the Lord, a dwelling place for the Mighty One of Jacob” (132:4-5). Psalm 132 isn’t simply a memorial to David, a recollection of what a great king he was. It’s an understanding that his history, as a servant of God, has a normative effect on the present.

The psalm enjoins God himself to keep David in mind. It begins, “Remember, O Lord, on David’s behalf, all his affliction” (132:1), and then implores God, “For the sake of David Your servant, do not turn away the face of Your anointed” (132:10). It’s a call for God to visit the people’s worship with his presence. Even after death, David must have made an impression on this psalm’s composer; he not only writes a psalm in the vein of the Psalmist Par Excellence himself, he also invokes David’s name as he asks God to bless his worship.

It’s not the easiest psalm for me to approach and get something out of. The experience of worship is just familiar enough for me to recognize the unfamiliar and distinctly Jewish elements present in the psalm: the Temple of Solomon, the priests clad in righteousness (vv.9, 16), the Davidic covenant and lineage of kings (vv.11-12). And when the psalmist writes, “Behold, we heard of it in Ephrathah, we found it in the field of Jaar” (132:6), I ask myself, “What is he talking about? Where even is the field of Jaar?” Sometimes it’s not all on the surface. I find myself wondering if the lines “There I will cause the horn of David to spring forth; I have prepared a lamp for Mine anointed” (132:17) are a Messianic prophecy, but I don’t know.

A long time ago, I started following Jesus Christ; the door opened, and I walked through. Now I’m on this journey, but sometimes the answers aren’t all on the surface. So I get out the shovel. And I dig.