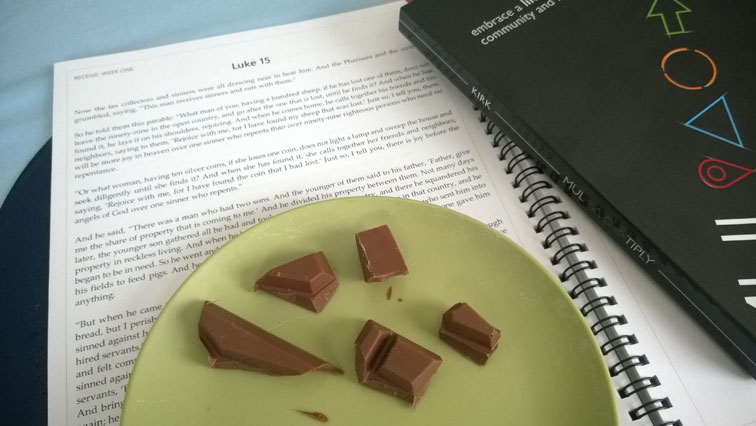 Earlier this week, I was talking with a minister friend who shared with me a problem that he termed “the separation of Church and Christian.” In modern, individualistic America, people become Christians but remain isolated from the body of Christ and the communal practices that allow us to grow and work together for God’s purposes. To a large extent, I think that this phenomenon stems from a short-sighted, single-moment understanding of salvation: say the right prayer, believe the right things, and get your “get out of hell free” card, because once saved, always saved. We’ve got evangelistic rallies that measure success by how many people crossed that line of belief that we’ve drawn; we’ve reduced grace to mere forgiveness without transformation or growth, as if God would pardon us and then leave us in the pits we’ve dug.

It’s not my intention to get on a soapbox. I mean, I got on one, but it’s not my intention. My point is that a lot of us have this myopic perspective on “getting saved,” and Luke 15 is one of the passages we can read it into. We can take these parables as illustrations of people praying the sinner’s prayer and crossing the Saved Line, but I don’t think they’re necessarily meant to be understood through that lens, regardless of whether the lens has any flaws in it. Whether the lens has any flaws in it is another can of worms entirely, and I’ve taken enough time in these first two paragraphs introducing my own lens for viewing Luke 15’s parables, so it’s time to dig into the actual dang text.

The word “saved” doesn’t appear in the chapter at all. And that’s not to say that there aren’t aspects of salvation here: the shepherd saves the sheep from the dangers of the wilderness, the father saves the son from poverty and grueling servitude, the woman…saves her coin? But Jesus’ focus, as seen in the words and phrases he repeats, is on lostness and repentance. He emphasizes that God and heaven rejoice over “one sinner who repents” (7, 10). He also repeats variations on the statement “he was lost and has been found” (24; cf. 6, 9). With these parables, Jesus intends to point out that when we repent and turn away from our evil, God is finding us and recovering us. The parable is a message to the Pharisees that the people they’re shunning are valuable to God, that he wants to rescue these people from being lost in their sins, and that if the Pharisees don’t understand God’s compassion and join him in pursuing the human beings wandering around in the dark, they themselves are just as lost.

A sheep, a coin, even a son can get lost more than once. And I don’t say that as a commentary on whether you can lose your salvation. Even if we assume eternal salvation, we still sin, we still stray from the path, we still get lost and need God to bring us back to the good way. It’s a repentance thing: we come to our senses amidst the muck and the pigs, we’re prepared to say, “Father, I have sinned against heaven, and in your sight” (21), and we find that our Father, in his eagerness to welcome us back, runs out to meet us and throws himself on us in a bear hug. It’s been my experience that it happens not just once, but time and time again: we find ourselves lost, we admit our lostness, God brings us back.

And whenever we come back, it’s not just to God, it’s to a community. Each time Jesus depicts the lost-to-found pattern, he shows people rejoicing together over the recovered thing. The shepherd tells his friends and neighbors, “Rejoice with me, for I have found my sheep which was lost!” (6). When the woman with the coin tells her friends and neighbors, she repeats the same expression word-for-word, replacing “sheep” with “coin.” (9) In the final parable, the father spares no expense in celebrating the return of his son. The whole household gets in on the party with music and dancing–and when the older brother resents the noise of the festivities and withdraws, the father tries to bring him back into the rejoicing community too. God has a plan for the world, and it isn’t straitjacketing yourself into stifling rules while judging and ostracizing anyone else who doesn’t put on the same straitjacket. It’s joy, community, and liberation from evil.

So, with that, we put a lid on Luke 15. We’re also putting a lid on June with the last of this month’s sponsored doodles from my Patreon. Thanks to Peter Metzger for making this doodle possible! He chose 2 Kings 9:3 as his subject verse:

Then take the flask of oil and pour it on his head and say, ‘Thus says the Lord, “I have anointed you king over Israel.”’ Then open the door and flee and do not wait.

The son of the prophets is saying what I believe is Hebrew for “woop woop woop.”