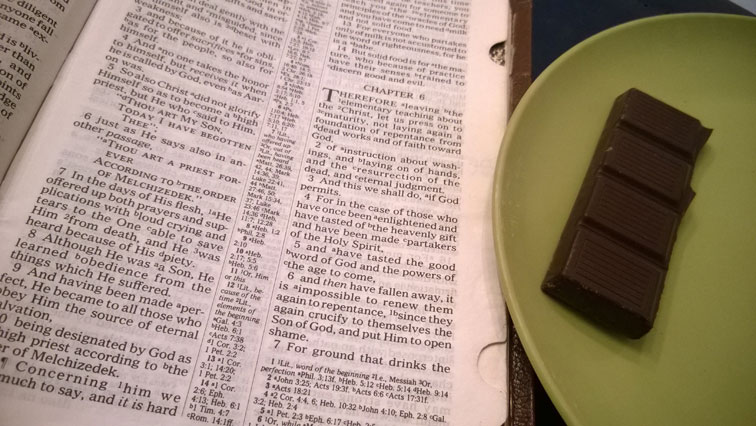 In order to go forward today, we’ve got to go back. In yesterday’s chapter, there were not one but two hard left turns, and we only covered the first. The chapter ends with a shift out of Christology into criticism, so let’s take a rewind.

It appears that the author of Hebrews is about to discuss Christ’s priesthood in relation to Genesis 14’s king-priest Melchizedek, but suddenly the writer calls his readers hard of hearing and starts bringing serious salt. He tells them: “For though by this time you ought to be teachers, you have need again for someone to teach you the elementary principles of the oracles of God, and you have come to need milk and not solid food” (12). In essence, he’s calling them babies who need to grow up. They ought to be parents, ready to raise up spiritual kids of their own through teaching, but instead they’re still kids themselves. So the author of Hebrews prepares to give them the spiritual milk they need but not before closing out chapter five with some high-sodium content.

So, having gone saline, he begins the next portion of his letter by urging his readers to pursue maturity in Christ. He identifies a theological core to the faith, consisting of several basic teachings of Christianity: “a foundation of repentance from dead works and of faith toward God, of instruction about washings and laying on of hands, and the resurrection of the dead and eternal judgment” (1-2). Repentance is where it begins: a response to God’s call to leave behind one’s sin and trust him with one’s life. Then there’s…washings and laying on of hands? Is he talking about baptism?

Checking a few different translations and commentaries, it looks like he’s talking about baptism. In his first letter, Peter describes baptism as “an appeal to God for a good conscience through the resurrection of Jesus Christ” (1 Peter 3:21). When we get baptized, we ask God to cleanse our inner self of its evil, renewing our conscience, and we identify with Jesus’ death and resurrection by going under and emerging from the water. I don’t believe baptism saves us or is necessary for salvation, but it’s elementary to Christianity, it’s commanded by Jesus Christ, and it’s therefore important and good to do. Clearly the author of Hebrews thinks so too, considering that he includes it in this list.

So the believers he’s writing to are young and immature in the faith. It could be worse, he explains. After all, there are people who–at least in some sense–buy into Christianity and its basic principles, become “partakers of the Holy Spirit” (4), get a taste of the good stuff, and then fall away. And we’re in thorny territory here, because the author of Hebrews writes, “It is impossible to renew them again to repentance” (6). Does that mean you can lose your salvation? Or if you “fall away,” were you never really saved in the first place?

Without supplying an opinion of my own, I would draw your attention to what the text itself says, and I’d add that over the years I’ve seen countless close friends leave the faith. When I first heard it ten years ago, a line from the O.C. Supertones’ “Wake Me Up on Time” hit me like a medicine ball to the gut: “I’ve seen so many turn away, the ones that had no doubt./ If you’ve been around, you know what I’m talking about.” Ten years ago, it hits me harder than ever, and I’m still trying to diagnose disbelief: what makes people reject Christianity? What makes people, as Albert Camus put it in The Plague, “doubtful cases?”

Whatever it is, the author of Hebrews seems to think his readers don’t have it. Instead, they’ve got a solid start, and he wants them to show that they’ve got the diligence to persevere. He observes, “God is not unjust so as to forget your work and the love which you have shown toward His name” (10), which reads more than a bit like an appeal to works-based righteousness, but the rest of the chapter emphasizes God’s promises–which he swears by his own name “since He could swear by no one greater” (13)–as the foundation of faith. Even if it’s up to us whether we stay in the game and receive salvation, it’s not something we earn by our own merit. It’s something we stand to inherit as God’s adopted children. Fundamentally, it’s a gift to receive or reject, not in a single moment, but over a lifetime and beyond.

And with that, we’re finally ready to talk about Melchizedek, which we will do in chapter seven.