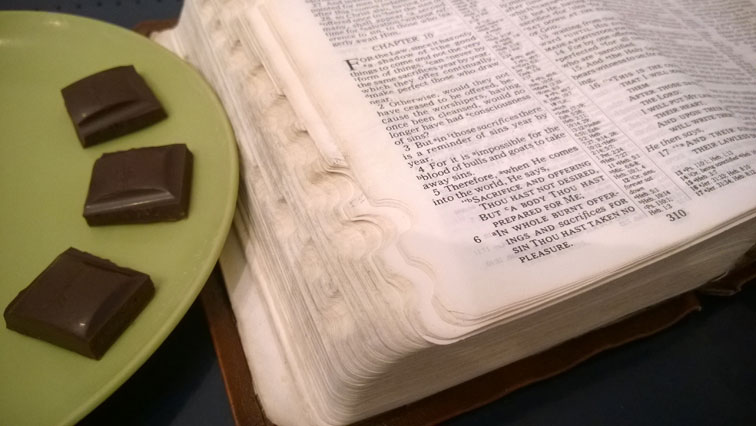 The first part of today’s chapter reiterates the theme begun in the previous chapter: Christ’s sacrifice covers our sin once for all, a single act making restitution for humanity’s evils and failings. It does what repeated sacrifices of bulls and goats could not do. It pays for the misdeeds of the spirit, not merely those of the flesh. So, let’s get into the latter half of the chapter, where we will find things interesting and new.

Cleansing is a theme here, as it is in the Bible as a whole. The author of Hebrews describes himself and his fellow Christians as “having our hearts sprinkled clean from an evil conscience and our bodies washed with pure water” (22). Baptism comes immediately to mind, but so do the ritual purifications of sprinkling prescribed for leprosy or unclean discharges (Leviticus 14:7-9, 15:5-8, 11,13), Naaman’s miraculous cleansing from leprosy (2 Kings 5:1-14), Jesus’ healings involving washing or cleansing (e.g. John 5:2-9, John 9:1-7), or the countless times that the psalmist asks God to purify him or wash him clean from sin (identifying such instances will be left as an exercise for the reader). The Bible is swimming with references to washing and its spiritual import. Cleanliness is highly symbolic, perhaps more so in a society without modern indoor plumbing. Preparing water for a hot bath took flint, steel, and patience.

But we’re not the ones doing the hard work. Jesus Christ has already cleansed our hearts; as a result, we’re not who we used to be. We’re clean people now, and we’re urged to “draw near with a sincere heart…hold fast the confession of hope…consider how to stimulate one another to love and good deeds” (22-24). The washing prepares us for clean living.

And if you’ve let down your guard with all this appealing talk of feeling fresh and clean and ready to love, then get your guard back up. The author of Hebrews warns, “For if we go on sinning willfully after receiving the knowledge of the truth, there no longer remains a sacrifice for sins, but a terrifying expectation of judgment” (26-27). It’s a stern warning for those who disregard Christ’s gift of cleansing; if the gift is a figurative bloodbath, then to ignore it is to invite a literal one. Is the author saying that you can contaminate yourself again with willful, habitual sin after you receive forgiveness in Christ? And if so, is he saying it can be irrevocable? It certainly echoes his former words: “For in the case of those who have once been enlightened…and then have fallen away, it is impossible to renew them again to repentance” (6:4, 6).

To persist in your own evil, the writer all but openly declares, is to refuse forgiveness and welcome judgment. His words are severe:

Anyone who has set aside the Law of Moses dies without mercy on the testimony of two or three witnesses. How much severer punishment do you think he will deserve who has trampled under foot the Son of God, and has regarded as unclean the blood of the covenant by which he was sanctified, and has insulted the Spirit of grace? (28-29)

In essence, he’s saying: you thought the earthly punishments of the Mosaic Law were harsh? The second covenant offers forgiveness. Just think how bad the judgment’s going to be if, having failed to measure up to the standard of the first covenant, you reject the mercy of the second. You’re throwing out the Son of God himself. Think twice before you do that.

And again, I think of the O.C. Supertones’ “Wake Me Up on Time.” So many turn away, the ones that had no doubt.