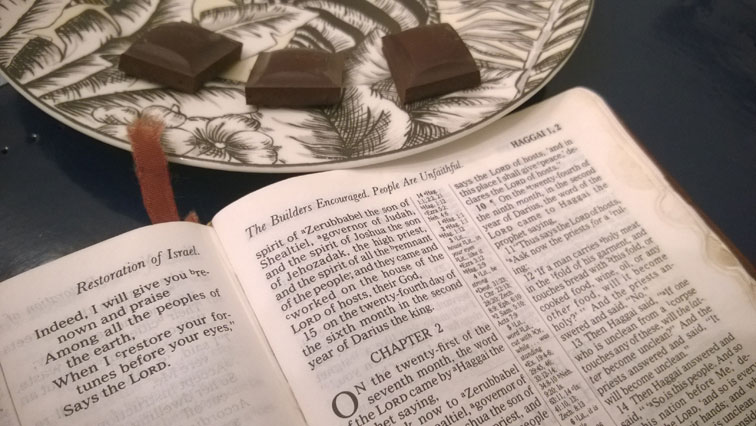 When you’re a prophet of the Lord, the word of the Lord comes to you. It’s what you do. Well, it’s not so much what you do as what happens to you. But then you go to the people and tell them the word of the Lord. Unless you’re Jonah, in which case you have to get caught in a storm at sea and swallowed by a fish before you’ll get up and do your job. But Haggai isn’t Jonah.

In the first chapter, Haggai gets one message from the Lord (and of course now I’m imagining an RPG-style text box: “Obtained one Message from the Lord!”). In the second chapter, three more distinct messages from God come to the prophet. The first is basically an encouragement to the builders as they reconstruct the temple–a promise that it will eclipse the old temple and that the project has God’s blessing upon it. The second is a bit more complex, and it took me a few rereads before it started to click.

It begins with an analogy that God presents to the priests via Haggai. God’s offers a twofold inquiry here. First, he asks, “If a man carries holy meat in the fold of his garment, and touches bread with this fold, or cooked food, wine, oil, or any other food, will it become holy?” (12). The correct answer is “no.” God follows it up with a second question: “If one who is unclean from a corpse touches any of these, will the latter become unclean?” (13). But the answer here is “yes.” What does this line of inquiry mean? What is God’s point?

It seems to be that you can’t get holy by proxy; you need to receive holiness directly from God himself. You can’t transfer it from a consecrated thing to your pocket to all your other stuff. Contamination, on the other hand, spreads from thing to thing, and God’s next line indicates that Israel has contaminated their offerings and their works with their sin: “So is this people. And so is this nation before Me…and so is every work of their hands; and what they offer there is unclean” (14). I still don’t entirely understand God’s next point, which has something to do with the scarcity and hazards with which God afflicted his people before the temple began to be built, and then there’s some figure of speech about seeds in the barn, but the last word is this: “Yet from this day on I will bless you” (19). In spite of Israel’s inadequacy, the contagious contamination of their sin, God will bless them.

Technically, the last word is a personal message from God to Zerubbabel, the governor of Judah, but that’s for Zerubbabel. If I say that the second-to-last word is God’s blessing, it blunts my rhetorical impact. When you’re an English major, you’re allowed to speak figuratively.

Thinking about yesterday’s post, I can’t help but consider that there’s another side to the coin of scriptural interpretation that I presented. We shouldn’t take a self-centered view of scripture, but God does have things to say to us through the Bible. I think about Haggai receiving these prophetic messages from God, and I can’t help but respect the chutzpah it would have taken for him to tell his countrymen, “God told me to tell you this stuff.” We can’t project our own desires and preconceived biases onto the word of God, our own short-sighted, circumscribed views, but neither can we ignore him. God still speaks, and we must take hold of the humility to learn and the courage to say that God has told us something.