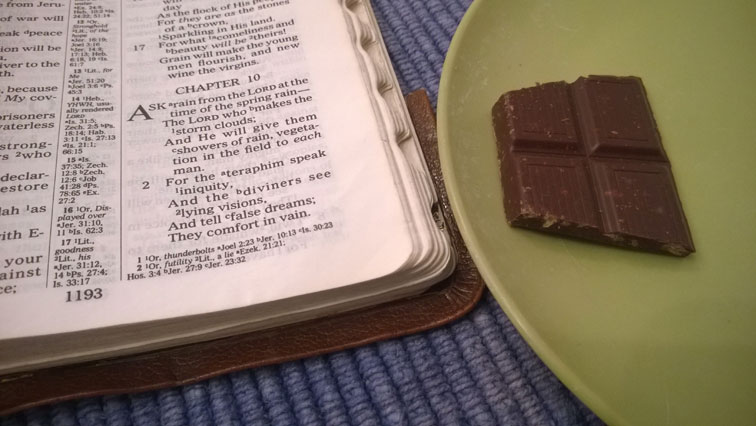 I’m having trouble starting the day’s post again. I’m sitting here at the keyboard, Bible to the left of me opened to Zechariah 10, as I type and delete half-finished introductions. I’ve got a number of hurdles between me and a completed post, but the most salient one is a question confronting me: should I open up the Theodicy Can again?

Zechariah 10 continues the prophecy of restoration for Israel. It’s about sheep and shepherding, victory in battle, and God gathering what he’s scattered. I jokingly considered making my opening sentence for this post “Okay, Thanksgiving’s over, now let’s knock it off with the gratitude and get back to work.” The passage isn’t directly about thankfulness, and to make that topic my focus here would be to shoehorn it in. But would it be shoehorning to view the passage predominantly in light of questions of theodicy?

Zechariah appears to have no doubt that God is good. At the minimum, as a prophet, he considers it his job to relay God’s message to its recipients, not to raise questions; inquiries of theodicy are apparently the province of angels (1:12). When God says, “I will bring them back from the land of Egypt and gather them from Assyria” (10:10), Zechariah does not see fit to ask why he “scatter[ed] them among the peoples” (10:9) in the first place. God even says, “They will be as though I had not rejected them” (10:6). One might well ask: what’s the point in judging his people if he’s just going to undo his judgment? But Zechariah doesn’t ask anything. Evidently, he believes God was just in dispersing Israel from their homeland, and he will be merciful in reuniting them and making them prosper.

But me? I’m torn. I guess I’m a prophet sometimes; some days God gives me a message, and I deliver it to whoever happens to read it on this blog. But I know a non-trivial number of my friends and my readers have theodicy issues, and at times I do too. On top of that, I do think the question of how we know God is good is one of the most important questions we can ask and attempt to answer.
But at the end of the day, I can’t live my whole life feeling like I’m obligated to be bothered. God is big enough to handle my honest doubts and inquiries, and I’m sure I’ll be back to the Theodicy Can. But there are a lot of important questions out there to ask. I don’t want to be blinded by a myopic focus on just one issue.

And look at this! I’ve spent the whole post asking whether or not to talk about theodicy, and I didn’t even get to talk about the sheep-and-shepherd stuff at the beginning of the chapter. That’s just perverse. Tune in Monday as we revisit Zechariah 10 and redress this travesty.

One thought on “Zechariah 10 – Cans and Shoehorns”