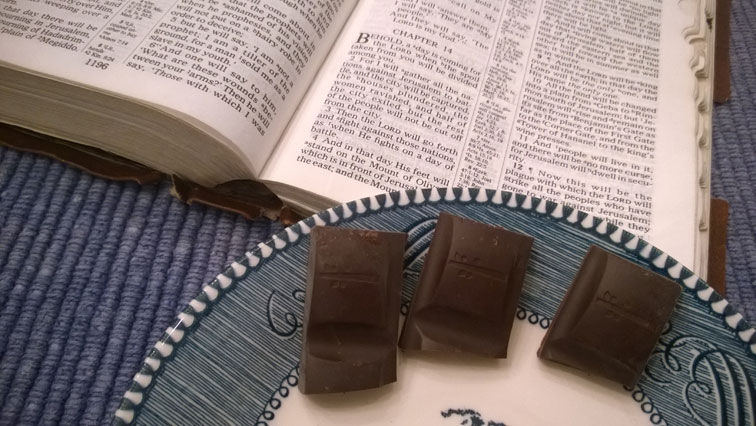 Yesterday’s chapter perplexed me, so I consulted James Burton Coffman’s commentary and managed to make some sense of the passage. Today’s chapter also perplexed me, so again I consulted Coffman. And he begins his remarks thus: “This chapter has been considered somewhat of an enigma by commentators for centuries.” Oh boy. And Coffman goes on: “We do not consider the chapter to be more than ordinarily difficult.” Oh, that’s reassuring!

Despite Coffman’s assurances to the contrary, after reading the passage and then reading that, I can’t help feeling like I’m looking up from the ground at the Great Wall of China. What truth can I hope to extract from this prophetic puzzle?

There are events in here that I have no idea what to make head or tail of. For instance:

In that day [the Lord’s] feet will stand on the Mount of Olives, which is in front of Jerusalem on the east; and the Mount of Olives will be split in its middle from east to west by a very large valley, so that half of the mountain will move toward the north and the other half toward the south. (4)

That obviously hasn’t happened yet, at least not in a literal sense. But is the Mount of Olives a symbol for something? Has the Lord already stood on the Mount of Olives and split it east-to-west in a symbolic sense? We shouldn’t think we’re going to have a 900-foot Jesus on our hands, should we? And then we have “all the land…changed into a plain from Geba to Rimmon south of Jerusalem; but Jerusalem will rise and remain on its site” (10). Should we expect titanic physical geographic rearrangements in the last days? Or is the spiritual Jerusalem, over which Christ is King, already raised up over all the earth, and that’s the fulfillment of this prophecy? I don’t know. And the whole passage is full of this stuff.

At the end of the day, I have to admit the limits of my own mind. Perhaps a more thorough reading of Coffman’s commentary would cough up some lucidity, but as it stands, I don’t know what this vision’s about. But I do know God, and I trust him to teach me what I need to know.