Man, how do I follow Thursday’s act? Real talk, fam: I can’t help feeling like I shot my wad with the previous post on the foundational importance of God’s sacrificial love. If what I said was true, then won’t whatever topic I talk about inevitably fall short in significance of what I had to say in that last post? Maybe so. But I wrote that post because I love God and you guys, so today I’m going to put my love for God and you guys into practice again, this time by writing a post that is not explicitly about love.

Nope, today I’m going to be asking one of my patented questions that may not even have an answer: what is the difference between a good man and a righteous man?

Paul appears to be positing a difference, even if only to make his bigger point that we humans are neither of these things and God loves us anyway. “For one will hardly die for a righteous man; though perhaps for the good man someone would dare even to die” (7) he says. Is he making a distinction of degree? Is the righteous man perfect, and the good man merely kinda decent? Are there two distinct qualities that he’s pointing out here? Of course, there’s only one way to find out, and that’s to look up the original Greek words and turn to Strong’s Concordance.

I kid, though; contrary to the impression that I might give off, I don’t believe original languages are the answer to everything. They can be helpful, however, and perhaps they will be so here. The word for “righteous” is δίκαιος, dikaios, meaning “just, righteous, impartial.” It’s a term at home in the courtroom, fit for determining who’s innocent or correct. The word for “good,” on the other hand, is ἀγαθός, agathos, meaning “good.” Well, that’s helpful, right? Let’s turn to the expanded definition from Strong’s: “intrinsically good, good in nature, good whether it be seen to be so or not, the widest and most colorless of all words with this meaning.” Agathos can be used to describe everything from soil to trees to human beings. When a thing is agathos, it’s useful or fertile or noble; it possesses whatever traits the ideal, best version of itself would possess.

So why make a distinction between them? Don’t the two go hand-in-hand? Wouldn’t the best man be both righteous before God and morally good? I was still puzzled, even after visiting Strong’s, so I hit up the commentaries. John Gill points out that in the Talmud and other works, the ancient Jews had sayings distinguishing a righteous man from a good one. The righteous man, according to one such writing, is “good for heaven” or “good to God,” and if a man is Good to God but evil to men, he is “a righteous man that is not good.” Paul is playing on this distinction, pointing out that we’d have no reason to die for a person who keeps the letter of the law and does his duty before God, and we might die for a person who is civically good and does the moral thing for his fellow human beings–but when does such a person exist? And even when we were at our worst, of no real benefit to heaven or earth, Jesus Christ died for us anyway.

I hope this has been an informative journey for you. Next week, we’ll have a new passage, but more of the same chocolate. Kroger was selling these Green & Black’s milk chocolate almond bars at a buck twenty-nine each, and fam, that deal is straight-up agathos. 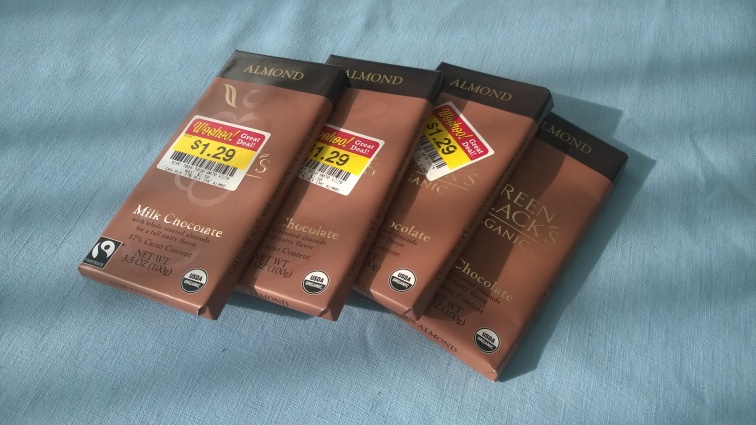