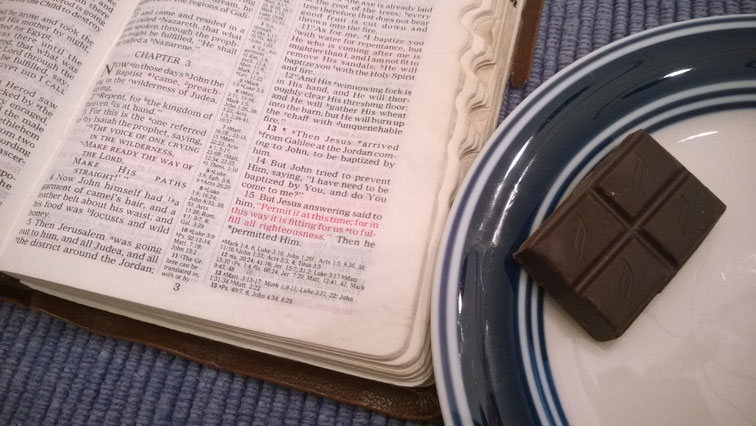 Around the time we started Luke, in celebration of the Christmas season, we also read through the nativity narrative in Matthew. Now we’re coming back to Matthew to finish what we started, and the third chapter here is basically everything Matthew has to say about John the Baptist’s ministry. We won’t see John the Baptist again until chapter 11, where we find him in prison, and again in chapter 14 for the events leading up to his execution at Herod’s hands. But today it’s the John’s Ministry Chapter, all the time JTB.

John is not about himself. Matthew identifies him as the subject of one of Isaiah’s prophecies, the “voice…crying in the wilderness, ‘Make ready the way of the Lord, make His paths straight!’” (Matt. 3:3, Isaiah 40:3). He’s on the scene to pave the way for Jesus. And given that he and his ministry focus on baptism, to the point where baptism becomes part of his name, we can see how exactly he’s preparing the way. “[The people of Judea] were being baptized…as they confessed their sins” (6), Matthew notes. When Jesus began his own ministry, he engaged a Jewish world acutely aware of their own moral failings who were in the custom of copping to their sins before God and each other, notably in the context of John’s baptisms.

John’s ministry is not about John; it’s about baptism and repentance, but most importantly, it’s about the Messiah. When Jesus himself shows up to get baptized, John asks incredulously: “I have need to be baptized by You, and [yet] You come to me?” (14, emphasis mine). John has already said he’s “unworthy to remove the sandals” (11) of the one he’s preparing the way for, a more powerful agent of God’s will who will bring fierce judgment and righteousness. When this person he’s been anticipating actually shows up, John has to be talked into baptizing him. And during Jesus’ baptism, the Spirit of God descends on him, and a voice from the heavens authenticates his calling and position as God’s Son (16-17). It’s the culmination of John’s ministry; that’s the last we hear of him baptizing. It never was about John.

But before that event, John’s ministry gains such prominence that even the Pharisees and Sadducees are coming out for baptism. John, however, lets them know that he’s not playing games. “You brood of vipers, who warned you to flee from the wrath to come?” (7) he demands. He further underscores that their Jewish heritage won’t save them, nor will a symbolic act of repentance (like baptism); it will take actual turning from their evil, submitting to God’s will, and doing good. John strikes me as wary that to the religious leaders, a public ceremonial cleansing may be less about getting their consciences right before God and more about making all the right moves in all the right places. And John, with his camel’s-hair clothes and locust diet, ain’t about ostentation.

John the Baptist is about Jesus Christ. What are you about?