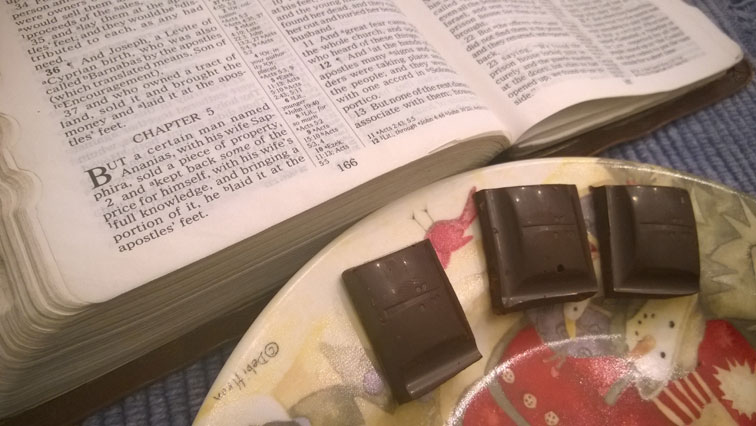 The end of the last chapter and the beginning of this one form a sort of interlude. The new Christian movement is sharing goods and property among its members. Some landowners are even selling their land to support their brethren, but a couple named Ananias and Sapphira, hoping to capitalize on the good favor that such deeds bring, keep back a portion of their profits and lie about how much they sold their land for. And then they die. I’m sure we could get plenty of mileage out of untangling that thorn bush, but frankly, I’d rather take a look at Peter’s second visit to Jewish Prison and the wisdom of Gamaliel the Pharisee. If you really want me to revisit Ananias and Sapphira, perhaps I will, if you ask nicely.

But apparently Peter can’t go a single chapter without getting into trouble. The early church is seeing more miracles of healing, more converts, and more attention from the community–both good and not-so. The current high priest, Annas, is a Sadducee, and a key part of the new movement’s message is that Jesus Christ straight-up came back from the dead, physical body and everything.

Peter hasn’t exactly been deeply concerned with the palatability of his message. Literally right now, I noticed for the first time how frequently he drops very specific accusations of sin into his public speeches. Just check out these scintillating gems of diplomacy and tact:

Dang, son! It’s as if Peter can’t pass up an opportunity to accuse the general populace of Jerusalem, and the religious leaders in particular, of killing the Messiah. Jewishly speaking, this is one of the worst possible things he might accuse them of. So we shouldn’t be too surprised when Annas the high priest gathers his Sadducee friends and puts the apostles in jail.

Perhaps we should be more surprised when, in the middle of the night, an angel lets them out of jail. At the angel’s instruction, they go back to the temple and continue preaching their message. And the Sanhedrin don’t like that! They take the apostles into custody and tell them, “We gave you strict orders not to continue teaching in this name, and yet, you have filled Jerusalem with your teaching and intend to bring this man’s blood upon us” (5:28). You nailed it, Sanhedrin! They are continuing to preach the resurrection, and Peter will not shut up about your culpability in the matter.

Even now Peter sees fit to drive that point home. Along with his fellow apostles, he tells the Council, “The God of our fathers raised up Jesus, whom you had put to death by hanging Him on a cross” (5:30). Peter is delightfully lacking in self-preservation instincts, isn’t he? And we can contrast this with his actions in the courtyard during Jesus’ trial, where he denied all association with Jesus to save his own skin. Peter’s response to the council is so inflammatory that the Council is set to kill him and his crew. And they probably would, if it weren’t for Gamaliel.

Gamaliel is the bomb defuser in the unfolding drama here. He presses pause and speaks to the Council privately, advising them: “Stay away from these men and let them alone, for if this plan or action is of men, it will be overthrown; but if it is of God, you will not be able to overthrow them; or else you may even be found fighting against God” (5:38-39). Let the message of these followers of Christ try to prove itself in the marketplace of ideas, he counsels the Council. Claimants to Messiahship have come and gone, and Gamaliel doesn’t know if Jesus of Nazareth was the real deal. But if these men they’ve accosted are really ministers of the Kingdom of God, Gamaliel really doesn’t want to set himself up as an enemy of God himself, and he advises his associates to do likewise.

So the disciples of the late great resurrected Jesus Christ continue preaching. And we’ll see if their movement continues to enjoy some measure of amnesty in the next chapter. (It doesn’t.)