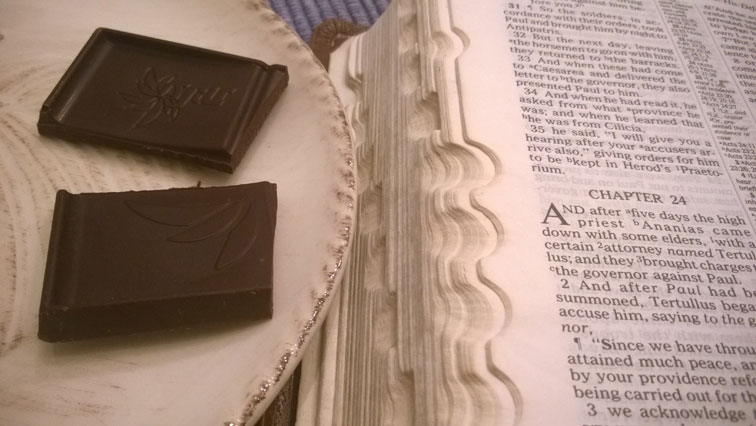 The events of today’s chapter are as follows: the Jewish authorities go before Governor Felix with their grievances against Paul. Paul gives his defense, asserting his innocence of any crime except believing in the resurrection of the dead, which of course is no crime at all. Felix dismisses the charges under the pretense of postponing his judgment, and Paul remains in protective custody for two years, during which time he has several opportunities to discuss religion and morality with the governor. But when the governorship passes from Felix to Porcius Festus, Felix decides to give the Jews a freebie and leaves Paul in prison.

Now, having stated the events of today’s chapter, let us dissect them.

To begin with, one thing immediately struck me: Tertullus, the orator that the high priest and the elders enlist for Paul’s prosecution, is a sycophant. He begins by crediting peace and national reforms to Felix, thanking him profusely, then ingratiatingly petitions him: “That I may not weary you any further, I beg you to grant us, by your kindness, a brief hearing” (4). The man’s speech drips with flattery, until he comes to the charges against Paul (which are pretty much outright lies).

When it comes to Paul and his “rabble-rousing,” Tertullus gets a bit vicious. He begins: “For we have found this man a real pest and a fellow who stirs up dissension…” (5). The line jumped out at me, if for no other reason that no one these days uses the word “fellow.” I couldn’t help but be curious what sort of Greek words the NASB rendered into an English that I can’t imagine spoken by any contemporary American human being. “Pest” is λοιμός, loimos, meaning “pestilence,” but the NASB supplied the word “real.” “Fellow who stirs up dissention” is a two-word phrase, κινουντα στασιν (kinounta stasin). The first word is a noun form of the verb κινέω, kineó, “to move, stir, or excite,” and the second word, στασιν, stasin, means “standing, place, dissension.” Think about our phrase “take a stand,” like a rebel or insurrectionist taking a stand for his cause. You might translate the phrase as “rabble-rouser,” except the sort of people who say “rabble-rouser” are the same nonexistent people who say “fellow.”

The NIV has a pretty natural rendering of the line, without taking too many liberties with the text: “We have found this man to be a troublemaker, stirring up riots…” I’d take a stab at it myself, but there are plenty of serviceable translations out there, and why get more lost in the weeds than we already are? Let’s get back to that two-year time skip.

When we’re telling stories, sometimes the relevant parts don’t happen with one part immediately after the other, and as the chapter ends, Luke sees fit to condense two years of conversations with Felix into a few verses. We can quickly see that these won’t be terribly fruitful dialogues. Luke reports, “As [Paul] was discussing righteousness, self-control and the judgment to come, Felix became frightened and said, ‘Go away for the present…’” Apparently the conversation got too real for him; the governor seems unwilling to confront his own conscience or Paul’s God. But over the course of these two years, he keeps calling Paul back to talk, because “he was hoping that Paul would offer him a bribe” (26, NIV). Not to paint the Empire with too broad a brush, but Felix seems like a typical Roman authority. Kudos to Paul for sticking with him despite the signs of futility. Sometimes these things are more obvious in hindsight.

And, of course, no good deed goes unpunished. Paul’s trying to get Felix to deal with his sin and his position before God, hoping to introduce him into the new life and family that Christ provides, but Felix opts to side with the Jews as he leaves office, leaving Paul in prison. We’ll see if his successor, Porcius Festus, is any less of a typical Roman governor. Perhaps Paul will fare better under him, but perhaps he’ll fare worse.