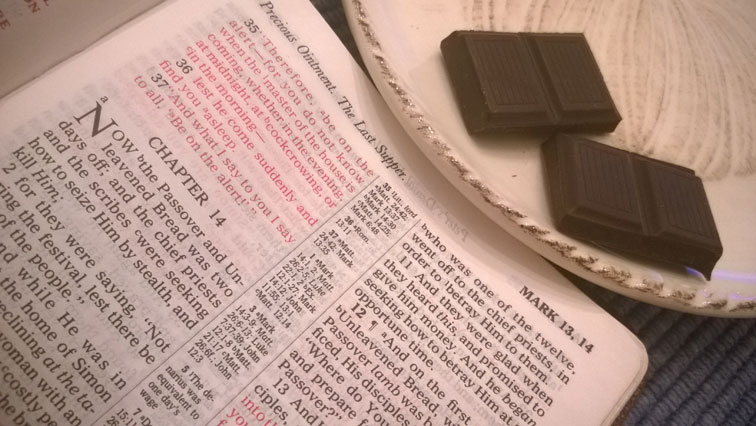 Did I already talk about how the night before the crucifixion is Judas’ fifteen minutes of fame? I did? Great. I guess I’ll have to find something else to talk about. And that shouldn’t be too hard, because while there is a lot of Judas in Mark 14, there is also a lot of other things, because it’s a big chapter. At 72 verses, it’s cleanly the biggest chapter in Mark. Let’s see what else it contains.

Right off the bat it pulls back the curtain on the chief priests’ and scribes’ conspiracy to kill Jesus. It’s no secret that from a very early point, Jesus had enemies with likely homicidal intent. Just after Jesus’ first Sabbath healing, Mark tells us, “The Pharisees went out and immediately began conspiring with the Herodians against Him, as to how they might destroy Him” (3:6). The word “destroy” here is ἀπόλλυμι, apollumi, and the “apo” prefix indicates a total destruction. Does it necessarily mean killing? I don’t think so. But there are few destructions more total than killing, so by no means is it off the table.

But by the time we get to Mark 14, there’s no question that Jesus’ enemies have murderous intent. “Now the Passover and Unleavened Bread were two days away; and the chief priests and the scribes were seeking how to seize Him by stealth and kill Him” (14:1), Mark reports. If the kid gloves were ever on, they’re off now. It’s murder time.

Interestingly, the word for “stealth” used here (δόλος, dolos) isn’t so much about evading notice as it is trickery or deceit. It made it into Jesus’ list of garbages that come out of the hearts of human beings, alongside coveting, pride, and a host of other evils (7:21-23). And sure enough, here deceit is, coming out of the hearts of the Jewish religious leaders. That word for deceit, dolos, literally means “bait.” The priests and scribes don’t have their bait in place as the chapter begins, but they find one soon enough in the willing accomplice of Judas. Jesus’ willingness to include a man he knows will betray him among his disciples? That’s an exploitable weakness. One might debate whether it’s truly deceit if the victim knows you’re setting a trap yet walks into it anyway, but Jesus’ enemies don’t know he knows. As far as they’re concerned, they’re gonna kill him dolos-style.

By the end of the chapter, they’ve accosted him in the Garden of Gethsemane, and his trial is underway even as Peter issues his three well-known denials. But before we close the chapter, I’ve got to note one of the weirdest moments in the Bible, a Mark exclusive. There in the garden, Mark tells us the peculiar story of a dude in a sheet: “A young man was following Him, wearing nothing but a linen sheet over his naked body; and they seized him. But he pulled free of the linen sheet and escaped naked” (14:51-52). What was this guy doing so sparsely dressed? Why was he tailing Jesus in the garden? Well, now I’ve made him sound like a creepo.