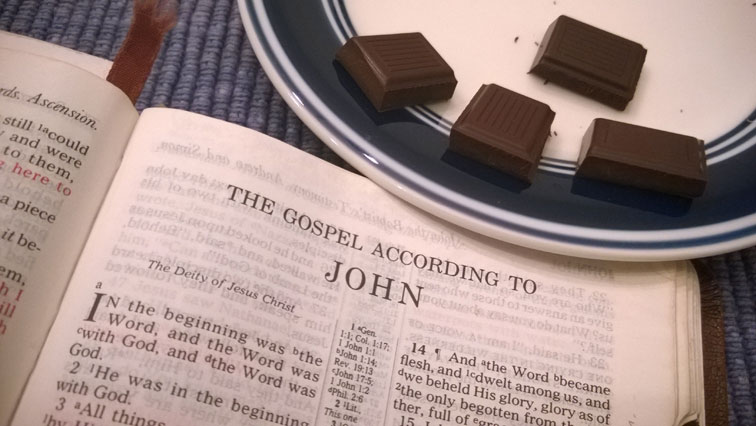 What is bread? The question has hounded philosophers and–wait, what? I’ve used that introduction already? What am I supposed to do for an intro? We’re going to be talking about Jesus’ use of bread as a spiritual metaphor again, and I need to create an engaging first paragraph to draw in readers! Oh, what’s that? Contrive a dialogue with an imaginary, unseen interlocutor who brings up the fact that I’ve already used the “What is bread?” introduction and posits an alternative? Seems a bit gimmicky. Do you have any better ideas? No? Neither do I. Okay, we’ll go with it. And with that out of the way, let’s talk about bread.

Today’s chapter starts with physical bread, because this is where John records the Feeding of the 5,000. He doesn’t note exactly how large the crowd is. However, he does note that a boy provides Jesus with five loaves and two fish to work with, and there are twelve baskets left over, which lets us identify this as the same event as in Matthew 14:13-21; Mark 6:31-44; and Luke 9:12-17. Philip gets a speaking part in John’s account, and John is also the only one to mention the kid whose food Jesus distributes to the crowd. Everyone gets fed, and as a result, they start calling him “the Prophet who is to come into the world” (John 6:14, cf. Deuteronomy 18:15), in the vein of Moses. They also start looking to make Jesus king, so Jesus gets the heaven out of Dodge.

But the crowds follow him across the Sea of Galilee, back to Capernaum. And I’ve been noticing that in John’s gospel in particular, Jesus exhibits preternatural knowledge of what people are really up to. Jesus tells Nathanael that Nathanael was previously chillin’ under the fig tree (1:43-51), he possesses peculiar insight into the human heart (2:23-25), and he tells the Samaritan woman her marital history spot-on (4:14-19). In the same way, he knows what these crowds following him are about. He tells them,

What led them to follow Jesus across the sea? Did they want more insight into God and his kingdom? Did they want to be a part of the movement of kindness, healing, and restoration that Jesus was initiating? Maybe some of them did. I’m not here to paint with a broad brush. But for the most part, they came for the free lunch.

And they set their own motivations on the table in full view when they ask Jesus for a sign. They already got a sign, yet they have the chutzpah to say, “What then do You do for a sign, so that we may see, and believe You? What work do You perform? Our fathers ate the manna in the wilderness; as it is written, ‘He gave them bread out of heaven to eat’” (6:30-31). Jesus points their attention to God, who provided the manna from heaven. And when they ask him for the bread of heaven, he points them to himself.

I recently finished reading C.S. Lewis’ A Grief Observed. The book takes the form of a series of journals he kept as a means of dealing with his grief over losing his wife to cancer. He records some aggressively rough nights of anger at God for allowing her to suffer and taking her away from Lewis, but he can’t help also feeling anger at himself for being so affected by the loss. A part of him is frustrated and disappointed with what his reactions reveal. If he found his satisfaction in God alone, it wouldn’t take away the pain of seeing his wife endure cancer and die, and it wouldn’t take away the pain of losing her either, but wouldn’t he be willing to endure these pains without railing at God and questioning his love, questioning whether he’s even there? He asks himself what he was really in it for, and whether he would honestly have faith in God if God was absolutely all that he got out of the deal. God gives us gifts, perhaps bread, perhaps spouses, and if he takes them away, where we go from there shows us something about ourselves.

Where would I be in the crowd in John 6? I absolutely love a free lunch. In my opinion, no delicious food cannot be improved by making it cost nothing. But if I really considered Jesus Christ to be completely adequate for all my needs, past, present, and future, I should be willing even to starve to death, if that’s God’s will.

But, thankfully, I currently have plenty of food available to me. And I suppose the best thing is to let the food remind me that God has given the food to me because he loves me, and that, at the end of the day, there are more important things than food.