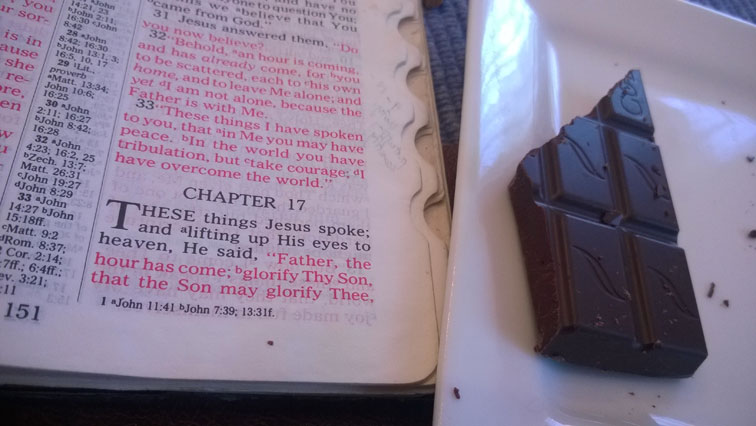 I might as well confess: I don’t pray in groups much anymore. That’s not to say that I don’t pray out loud, but when I do pray out loud, usually the only one who hears me is God. Or I’ll be offering a cursory ritualistic prayer before eating a meal with family or church family. I bring this up because when I do pray as part of a larger praying group, sometimes I become acutely conscious of the other people hearing my prayer as well as God. Sometimes we pray with witnesses to the act, or an audience, or however else you might term the third parties listening to what you’re saying to God. And as a result, we may say certain things for the benefit of the people listening.

Jesus Christ prays just such a prayer at the Last Supper in John 17, in the presence of his disciples. And you know what? I feel like getting into the Greek. Let’s get into the Greek of his prayer.

Originally, Jesus almost certainly delivered this prayer in either Aramaic or Hebrew, yet John has recorded it, like the rest of his gospel, in Greek. The prayer doesn’t just convey Jesus’ words to God, and neither does it stop at conveying a message that Jesus wants the disciples overhearing it to hear. It communicates something that John wants his readers to understand as well: you and me. Jesus has something to say here, and John has something to say to us about what Jesus had to say. He considered these words important enough to translate for a Greek-speaking world, and they’ve been further translated into English so we can read them too. And I’d suggest that’s because these words, at least in part, don’t merely apply to the twelve disciples who heard them. They apply to us too.

So, Greek bit #1: there’s a phrase that Jesus repeats aggressively in the middle of his prayer. It’s “not of the world,” from which we get that popular Christian expression “in the world but not of it.” Jesus says “not of the world” five times in the space of verses 14-16, and four of these come from when he states “They are not of the world, even as I am not of the world” twice, word-for-word. The word “world” here is the Greek κόσμος, kosmos. When we see “kosmos,” we probably think Carl Sagan, but the typical Greek would think of the human world. It’s a word for an ordered system: like the universe, sure, but also like our social world with its rules and patterns.

So, what does it mean that we’re not “of the world?” The preposition ἐκ, ek, is a tough one to translate, but it indicates movement out from something. Sometimes it can indicate origin, like a person migrating out of their home country, or a baby coming out of the womb. Despite his earthly birth, Jesus doesn’t come from our human world order. In the same way, although we were born as human beings, we’re not from this birth-and-death-and-a-whole-bunch-of-mostly-evil-interpersonal-interactions-in-between anthropic cosmos. We’re not out of this world. We don’t derive our essence from it.

And we’re not leaving it, either, at least not yet. Jesus prays, “I do not ask You to take them out of the world, but to keep them from the evil one” (15). Here we are in a world that we’re not from, but because we’re not from it, we don’t have to go out of it. Jesus Christ simply asks the Father to protect his disciples from the architect of the anthropic structure. And I don’t mean someone like Hammurabi or Alexander the Great or Thomas Jefferson; for all our efforts to form a more perfect union, the Devil’s had his hand in the pot from the advent of humanity.