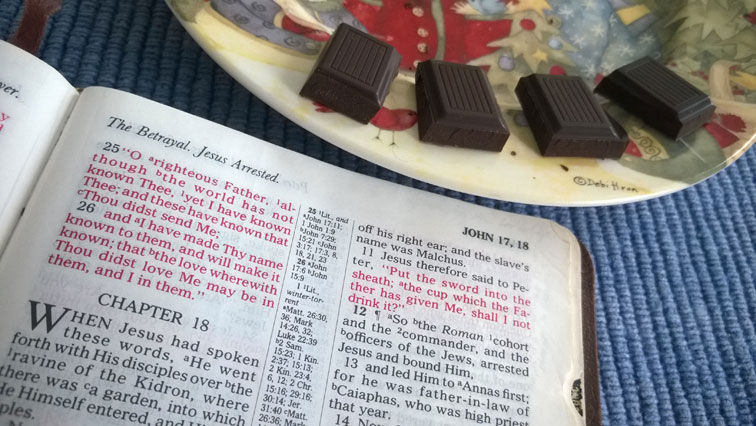 If you’ve read even one gospel, the events of John 18 will seem pretty familiar to you. There are passages in John which read like him whispering, “Come hear this thing about Jesus that you never knew!” But between Jesus’ arrest in the Garden of Gethsemane, Peter’s three denials, the inquisition at the Jewish temple, and Jesus’ questioning before Pilate, this chapter feels like John’s just hitting all the events that everyone knows happened. What is this: four chapters of John-exclusive content at the Last Supper, and then suddenly a synopsis of the synoptics? Not quite. The events may be the same, but John includes a few new details about them. Let’s take a look at one such detail.

When Judas went to accost Jesus in the Garden, as John tells us, Judas’ entourage wasn’t just a crew from the religious leaders, nor was it some rabble of randos. The scribes and Pharisees had managed to enlist the help of a Roman cohort (3), a military unit usually 600 to 800 strong. And apparently the high priest’s slave, Malchus, was there (10), which suggests there were others from the Jerusalem religious cadre along as well. Point is, Jesus and the disciples could not possibly hope to take this crew in a fight. Not that it stopped Peter from trying, because–like all of us–Peter in certain situations is a very particular kind of dumb.

Jesus wisely stays his hand. But that doesn’t keep him from putting the fear of God into the crew before him. Jesus steps forward to meet them, and when they tell him they’re looking for Jesus of Nazareth, he tells them: “I am He” (5). John tells us what happens next: “When He said to them, ‘I am He,’ they drew back and fell to the ground” (6). Jesus stares down an entire Roman cohort and makes them blink, even lose their footing.

What would make six hundred armed and trained men back down from a single pacifistic holy man? Authority. It’s a curiosity of the English language that you or I, if saying, “I am he,” would have to supply the word “he” as part of the predicate. In Greek or Hebrew, it’d be grammatically acceptable to omit it when presenting yourself in such a fashion. Jesus simply tells the soldiers two words: “I am.” This is the name that God uses to identify himself to Moses when he calls him to liberate the Hebrews from the Egyptians (Exodus 3:14). It’s a name with the power that created the universe behind it. It’s the name of a being who is who he is, and whom you can’t coerce or change. If he comes with your cohort of Roman soldiers, it’s not because you came looking for him. It’s because he’s willing to.

That’s Jesus’ secret: the authority that commanded matter, time-space, reality itself into being. He’s the King of Existence. He’s God in the flesh. And he is who he is.

On a logistical note, you may have observed that I unintentionally ended up taking the Fourth of July off. However, that doesn’t mean you won’t be getting your usual five posts of Chocolate Book this week! Tomorrow, I intend to have at least one post ready for you, possibly two. And if you only get one post tomorrow, then on Saturday I’m gonna knuckle down and get this blog caught up. Watch this space for more words about the gospel of John!