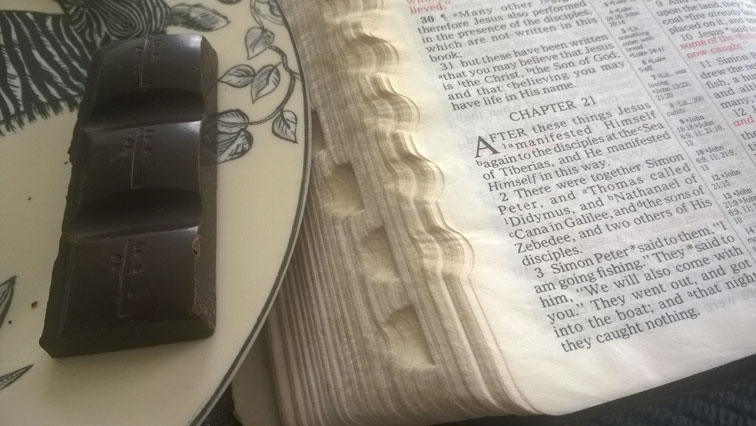 I just realized: John 21 is the post-credits scene.

I would say it’s the extra track on the album, but it’s not the 90s any more. John 20 drops a coda in its final two verses, stating its purpose: “Therefore many other signs Jesus also performed in the presence of the disciples, which are not written in this book; but these have been written so that you may believe that Jesus is the Christ, the Son of God; and that believing you may have life in His name” (20:30-31). That’s the message John wants to get across to you, the reader. And he got it across, right? So he can end the book.

He’s got this weird final scene. Peter and the other fishermen among the disciples have gone back to fishing. And you might not expect them to, but what else are they going to do? Jesus keeps coming and going, showing up in closed rooms and eating fish. He instructed them to wait in Jerusalem to receive the Holy Spirit (Luke 24:49), but that hasn’t happened yet, and a person’s gotta eat, right? So they’re fishing. But then Jesus shows up again.

And this is one of those weird occasions where people don’t realize Jesus is Jesus. And now that I think about it, a fair number of these occasions occur after his resurrection, don’t they? We saw it with the guys on the road to Emmaus (Luke 24:13-16). In just the previous chapter, we saw it happen with Mary Magdalene (John 20:14). But here on the Sea of Tiberias, the disciples–the four disciples who have been with Jesus basically from the moment he started having disciples–don’t even realize it’s Jesus on the beach until he replicates the inaugural miracle of filling their nets with fish that got them on board. It never says that Jesus magically disguises himself in these instances or magically makes himself look like someone else. People just don’t realize it’s him. It’s as if he can generate, at will, a Somebody Else’s Problem Field.

I don’t know why he chooses to remain temporarily incognito among some of his closest friends. I don’t know why God himself chooses to make his presence known in the form of his absence (Psalm 13:1). Look, it’s a weird chapter in numerous ways. I haven’t even gotten into half of them. I’m gonna hold L, R, Select, and Start simultaneously, you guys. Catch you back at the beginning tomorrow.