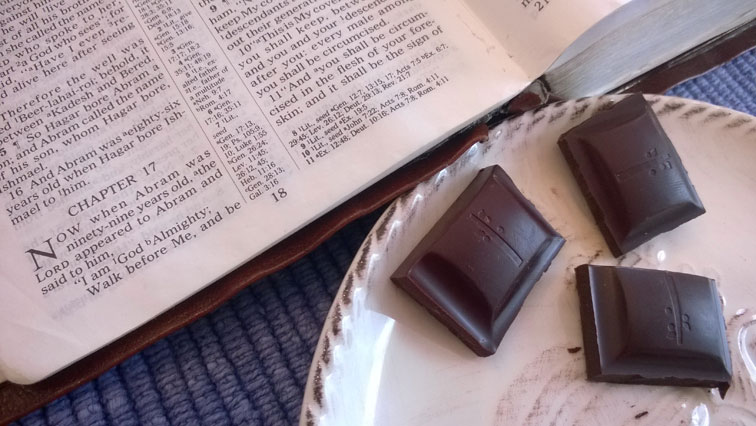 Finally, Abraham is officially Abraham! Now I can stop feeling weird when I refer to him by the name by which he is most widely known, but which he has not technically been given yet!

Abraham used to go by the name “Abram,” as you may have noticed while reading alone. “Abram” means “exalted father,” but “Abraham” means “father of a multitude.” And Abraham isn’t the only one to get a new name. His wife, Sarah, was previously known as “Sarai.” The NASB translation notes don’t have anything for me on what “Sarai” means, and internet search results are inconclusive, suggesting that it’s a variant of “Sarah,” or derived from the same root as “Israel” (therefore meaning “she strives”), or possibly just a Hebrew rendering of a non-Hebrew name. We know “Sarah,” however. It means “princess.”

It occurs to me that a name may say more about the parents than it does about the child. Can you imagine giving your kid a name meaning “exalted father?” I suppose the closest analog in terms of syllable count would be naming him “Elder.” It’s the kind of name that carries a hope for a long life, long enough to birth the next generation. It also carries a hope for being, you know, exalted. Imagine having that noise integrated into your name! Imagine being unable to introduce yourself without being construed as bragging. I can’t help thinking of the video game Super Punch-Out’s upper-crust British braggart boxer, Narcis Prince.

But that was Abraham’s old name. Time and time again, God’s promise to Abraham has been “descendants from heck to breakfast,” and the new name reflects that. Abraham doesn’t need exaltation through appellation! God has given him a new identity as a dad of nations. He won’t just be a father, but a father of fathers, with offspring for generations. There’s no egoism hard-coded into his new moniker: just a promise from God.

Anyway, Abraham has a new name, and it’s Abraham. However, the covenant entails giving up part of himself, and we’re not talking about his name.