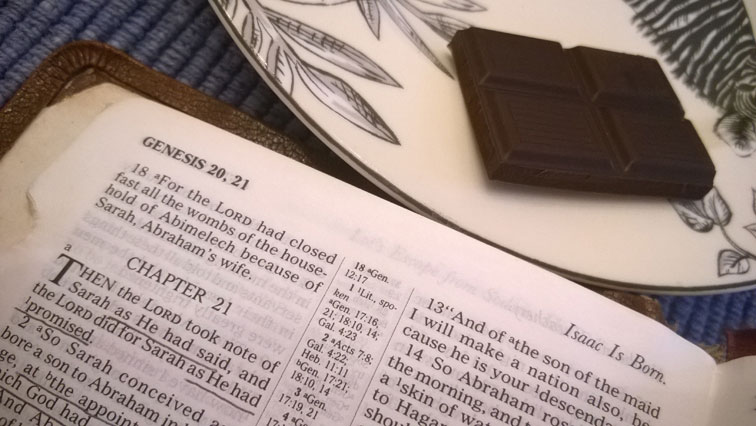 In today’s chapter, Abraham and Sarah finally have their son. A year from the three men’s visit, just as he said he would, God visits Sarah and enables her to conceive. An omnipotent creator of the universe is never late, nor is he early; he arrives precisely when he means to.

Sarah names the child Isaac, which means “he laughs.” And God didn’t tell her to give her son the name Isaac; she picked it herself. She’s able to look back on the meeting a year ago, when she overheard God’s promise to give her a child in her old age and laughed to herself, and then God called her on it, and laugh at how things turned out. It’s healthy to have a sense of humor about things and not to take yourself too seriously. And perhaps it’s easier to do so once God has actually given you the child.

But then something happens that is no laughing matter to Sarah. The account tells us: “Now Sarah saw the son of Hagar the Egyptian, whom she had borne to Abraham, mocking” (9). The NASB supplies “playing” as an alternate translation for “mocking.” The Hebrew word in question is צָחַק, tsachaq, the same root that Isaac’s name comes from. It might mean simply goofing around or having a good laugh; then again, it might mean poking fun at someone, whether good-natured or otherwise. I’m not sure whether we’re meant to infer Isaac as the object of Ishmael’s laughter.

But Sarah certainly seems to. She tells Abraham to kick Hagar and Ishmael out of the house, saying, “The son of this maid shall not be an heir with my son Isaac” (10). It may be that Ishmael, by this time at least in his early teens, was gloating over his technical status as Abraham’s firstborn son. Abraham appears torn over what to do, but then even God comes out in favor of kicking out Hagar. He instructs Abraham:

Do not be distressed because of the lad and your maid; whatever Sarah tells you, listen to her, for through Isaac your descendants shall be named. And of the son of the maid I will make a nation also, because he is your descendant. (12-13)

Abraham sends Hagar on her way with food and water for the road, except that there isn’t a road, there’s just a wilderness. And Hagar runs out of water.

And if you’ve been saying to yourself the whole way, “Harsh, Sarah! Harsh, Abraham! Harsh, God!” then welcome to the Saying That’s Harsh Club, because that’s what I was saying too. Thanks to Abraham and his wife and his God, Hagar and her son are alone in the desert, at the point of dying by dehydration. Hagar’s hidden Ishmael out of sight so she won’t have to watch her son die, and she’s bawling her eyes out.

Sure, God steps in. He preserves both their lives; he keeps his promise to make a great nation out of Ishmael. “God was with the lad” (20), the account tells us, as Ishmael learns to use a bow and takes a wife. But if you’re still asking yourself whether God’s justified in dragging Ishmael and his mother to the brink of death, I can’t stop you. That’s the big question of theodicy, isn’t it? Whether God is justified in taking us out of the house and into the desert, even if after all that he gives us the well and the skills and the legacy. Whether something good comes out of the suffering that you don’t get any other way. I know where I’m at with that question right now, but most of us leave more than one house and go through more than one desert before we die. Ask me again in half a year, see where I’m at, knock on wood.

Anyway, there’s some stuff at the end about King Abimelech making a concentrated effort to keep on Abraham’s good side, but I don’t really have that much to say about that. My browser’s dictionary is trying to correct “Abimelech” to “Impeachable.” What do you know about ancient Semitic names, Google Chrome?