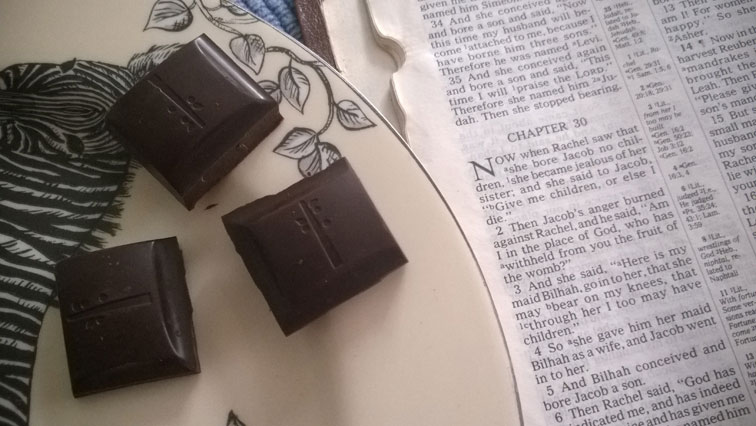 Good lord, where do I begin? This chapter’s got more drama than a 1980s daytime television serial. First we pick up where we left off in Rachel and Leah’s race to have as many sons that they can call their own as humanly possible, and then Laban tries to convince Jacob to continue working for him when Jacob has clearly had enough of employment under his uncle. The friction is palpable, and all through the chapter my soul is facepalming. Remember how I ended Friday’s post with the observation that maybe, just maybe, human relationships are worth it? That’s a hard “maybe.”

From Leah, Rachel, and their respective maids Zilpah and Bilhah, we get the twelve tribes of Israel. Each son’s name is a snapshot of where Jacob’s two wives are in their rivalry as that son is born. For example, Issachar is conceived when Leah trades Rachel some mandrakes picked by her son Reuben in exchange for getting to have sex with Jacob that night. Issachar’s name comes from the Hebrew root סַ֫חַר, sachar, meaning “profit” or “wages.” The two women start offering their maids to Jacob as surrogate partners in an effort to out-produce each other. The Mosaic Law may not technically forbid polygamy, but dang if you can’t use Genesis 30 to make a strong case against it.

So much, then, for the arms race of children. Let’s move on to Jacob and Laban.

To cut to the chase: Jacob wants to leave, but Laban, who’s profited substantially from Jacob’s work, offers to write him the ancient equivalent of a blank check. Jacob sets as his wages all the speckled or spotted sheep and goats from Laban’s flocks, effective immediately and for as long as Jacob works for him. What follows reads like ancient Near East voodoo. Jacob takes various tree branches and strips off the bark, so that the dark branches are striped white. When the stronger sheep go to the gutters and watering troughs to drink and mate, Jacob breaks out the striped wooden rods, so that the stronger offspring will come out spotted too, but he withholds the rods from the weaker sheep of the flock. Are we suddenly in a Patrick Rothfuss novel, in which some Tehlin priest is unwittingly telling a tale of some primitive practice of sympathy? I thought the Bible was a book of miracles, not magic.

Normally, this is the part where I’d trawl the internet for answers and possibly seize upon the first one that offers any hint of resolution for the can of worms I’ve opened up. But look, if you want an answer, you clearly at this moment have internet access and are perfectly capable of googling for yourself. Even without any hunting, the possibility occurs to me that perhaps God did perform a miracle of heredity here, and we’re meant to infer it. I’m not settled on that explanation, and if you’re in any degree inclined to reject it as implausible, I won’t fault you for doing so. But I don’t expect to have all the answers or understand everything about Genesis, much less the entire Bible. I’m willing to leave this one an open question.