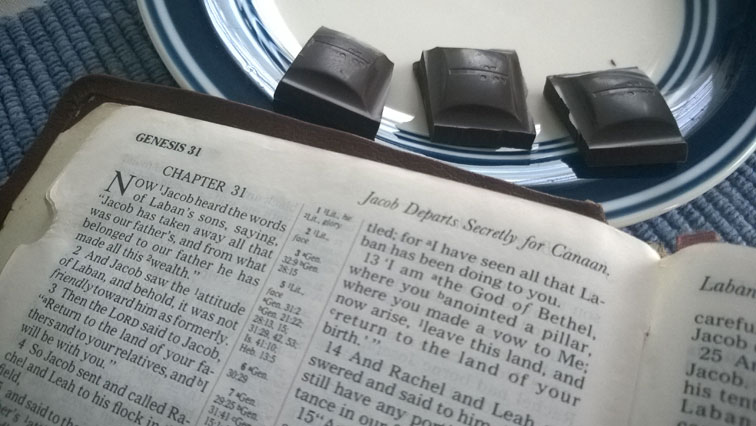 I hope you like more bad behavior from bad people, because Genesis has got it in spades. This book is not afraid to show its protagonists’ faults and shortcomings. I don’t think I need to recapitulate all the bitterness between Sarah, Hagar, and Ishmael, or how Noah and Lot both exit the narrative on a low note, or Abraham and Isaac’s habits of lying to kings. I don’t need to, but I will. The account has got no qualms about making you ask yourself, “What is wrong with these people?”

This particular chapter is about Laban being on his worst behavior, although Rachel gets in on the bad action by stealing her dad’s household idols, hiding them, and engaging in deceptive behavior to keep him from discovering their location. But Laban! We discover that he’s changed Jacob’s wages ten times, and he’s mad that Jacob is still making out like a bandit through hard work at animal husbandry. He’s frustrated that he can’t get a piece of that action, no matter how hard he tries to skim the pot of Jacob’s due recompense.

And this is his own nephew he’s attempting to take from. If you hired your nephew for a job, would you try to garnish his wages to line your own pockets? No? Good. You are at least not as bad as Laban.

Jacob’s had enough, so he takes his family and possessions and leaves without telling Laban. It probably doesn’t help things that this is when Rachel steals the household idols. But when Laban comes in pursuit, he’s so intent on wrecking Jacob’s fortunes that God has to step in, warning Laban in a dream: “Be careful that you do not speak to Jacob either good or bad” (24). He makes himself out to be the one swindled, going on a “woe is me, you didn’t give me the privilege of throwing a proper going-away party for my daughters” fuss (26-28). But then he turns Jacob’s camp inside-out looking for the missing idols, showing where his true priorities lie.

Jacob initially complies and helps his furious uncle look for his missing property, not knowing that Rachel stole them. But when the goods don’t turn up and Jacob goes off on him for all the abuses and false accusations, Laban has the gall to justify himself. “The daughters are my daughters, and the children are my children, and the flocks are my flocks, and all that you see is mine” (43), he declares. He still views all this stuff, even these people, as his by right, even though he agreed to give them to Jacob. You know that thing I say? “We are not good people, and we want to believe we are good people more badly than we want to be good people?” Laban is a cheat and a deceiver, and at the end of the day he’s deceived himself and cheated himself out of an honest self-understanding.

Then again, maybe Jacob has it coming to him for all the fast ones he pulled over on his brother Esau. There’s an element of poetic justice here. Truly, there is none righteous, especially not in the book of Genesis.