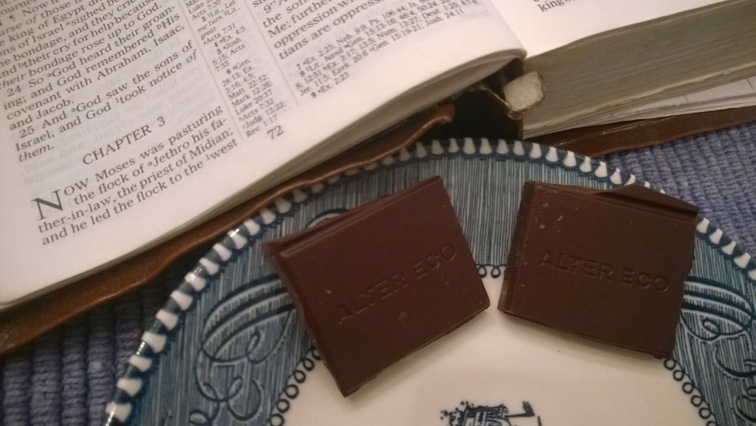 Today’s chapter features the first half of a conversation with God that will turn Moses around and send him back to Egypt. It features a miraculous flaming bush that burns for far longer than a bush has any right to, and which emits God’s voice. It features Moses’ commission to bring the people of Israel back to the land that is their birthright. It features God’s holiness and compassion in equal measure. And, famously, it features God formally giving his name, the tetragrammaton YHWH. But the event raises a question: why the crud does Moses need to be told God’s name?

The thing is, people already knew God by name. The patriarchs–Abraham, Isaac, and, as we’ve discussed, Jacob–certainly did. Seth’s son Enosh and his sons did (Genesis 4:26). Even Eve did. When she says, “I have gotten a manchild [Cain] with the help of the Lord” (Genesis 4:1), she refers to God by the same name the Creator uses to identify himself in today’s passage. It’s the earliest instance in the Hebrew Bible of a person mentioning God by name. The first human beings knew what God’s name was, the first Jews knew what God’s name was, and now somehow Moses doesn’t.

And if we take his question “Now [if the children of Israel] may say to me, ‘What is His name?’, what shall I say to them?” (Exodus 3:13) at face value, neither do God’s chosen people. Here in Egypt, we’ve got an entire generation on our hands who either never learned or forgot what to call their Creator.

When God hears their cries of laborious suffering and gets ready to intervene, they’re not even crying out to him. They’re just plain groaning because they have to build Egyptian crap all day (Exodus 2:23-25). We’ve at least got some midwives who know which side their religious bread is buttered on, but something along the way has gone horribly wrong. And I start wondering: maybe Jacob’s family wasn’t supposed to relocate to Egypt.

But you know what? Let’s entertain the idea that Israel and his children screwed up. And let’s watch as the God with the four-letter name gets the children of Israel out of this pit by way of some miracles that will put the burning bush to absolute shame.