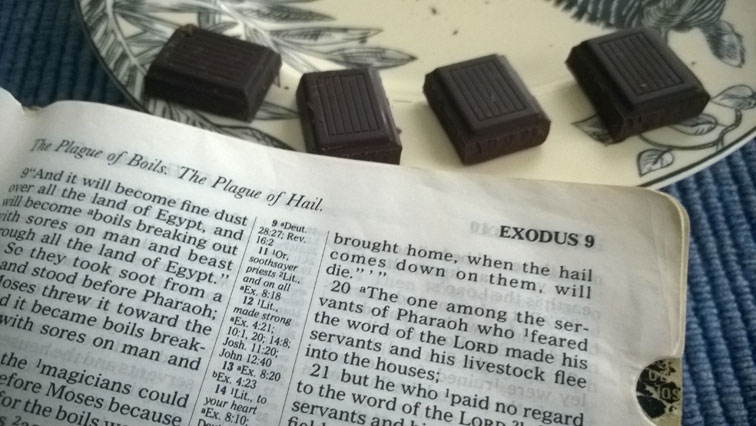 God doesn’t pull any punches in Exodus 9. If anything, between the livestock-slaying pestilence, the flesh sores, and the hailstorm, he ups the ante. And as I read about God wrecking shop on the Egyptians’ animals, skin, and crops, I couldn’t help thinking, “This is not going to go over well with some people.” The Shortpacked comic in which David Willis, by way of The Prince of Egypt, goes for the throat of the God of the Exodus narrative springs readily to mind. I can’t hope to resolve every difficulty with Exodus in a single post, but perhaps I can shed light on a few issues and offer answers to some questions. You know what? This one’s for the skeptics. This one’s for the skeptic in you and the skeptic in me. Let’s do it.

The plagues of this chapter have a way of opening up the Theodicy Can. It’s one thing to experience the discomfort of ubiquitous gnats or frogs. But here God ramps up the plagues into actual widespread devastation in a way that may provoke a more visceral emotional response. God isn’t just allowing evil to exist, which might be understood as an act of mercy; he’s actively causing suffering. On the other hand, that would be the proper response if the Egyptians deserve suffering, and one may argue that they have it coming for enslaving Israel and worshipping false gods. But then we’re back to the old question: if God is all-powerful, then why does he allow the Egyptians to do evil things that would deserve suffering?

If we look at the breadth of the entire Bible, I think the answer offered is that when God allows evil, he can then demonstrate his own goodness. He can show his justice in punishing evil with appropriate consequences and his mercy in making the consequences less severe than we deserve. Ultimately, his justice and mercy are most fully displayed in Jesus Christ, who died on the cross to bear the penalty for our evil and offer all of us the gift of forgiveness and reconciliation to God.

There’s more one could say on that topic, especially if one is willing to go down the free-will-versus-determinism road. And I have no interest in making this post eleventy bojillion words long, so let’s change gears and look at another issue that’s been on my mind.

Moses’ iconic words from God to Pharaoh, “Let my people go,” make it into just about every adaptation of the Exodus from The Ten Commandments to The Prince of Egypt. But this chapter reminds us why and how God tells Pharaoh that he wants his people liberated. His exact words here are “Let My people go, that they may serve Me” (9:1), calling back to his original command to Pharaoh, “Let My people go that they may celebrate a feast to Me in the wilderness” (5:1). Ostensibly, God wants his people to take a three-days’ journey into the wilderness in order to sacrifice to him (3:18), but in fact he intends to liberate his people from Egyptian rule and return them to Canaan. Is this a trick? Did God attempt to get Pharaoh to release his people under false pretenses? How could the God of truth not just participate in a lie, but actively aim to deceive?

But at the end of the day, I don’t think it’s a lie. I think that if Pharaoh had allowed the Israelites to go perform their rites of worship, then that’s exactly what God would have them do. And I speculate, but I think that from there, God would have told Pharaoh that the Israelites belonged to God, not to Pharaoh, and that he was going to return them to the land he gave to their forefathers, and that neither Pharaoh nor all the gods of Egypt would be able to stop them. However, that wasn’t what was going to happen, and God knew it. From the outset he told Moses, “I know that the king of Egypt will not permit you to go, except under compulsion” (3:18). That phrase “under compulsion” is literally “by a strong hand.” Pharaoh won’t let the Hebrews go until he experiences God’s power for himself. He won’t even acquiesce to a reasonable request to let them practice their religion. If he decides to deny them the simplest of religious liberties, why would he release them from slavery and give them their freedom?

He wouldn’t. God knows our bent; he knows what choices we’ll choose to make. Pharaoh’s already made up his mind here. And if he chooses to view people as property with no rights, then step by step God is going to show him that any freedom he himself has is a gift from his all-powerful Creator. Only one of them truly possesses the power of a god, and Pharaoh’s going to learn that lesson the hard way.