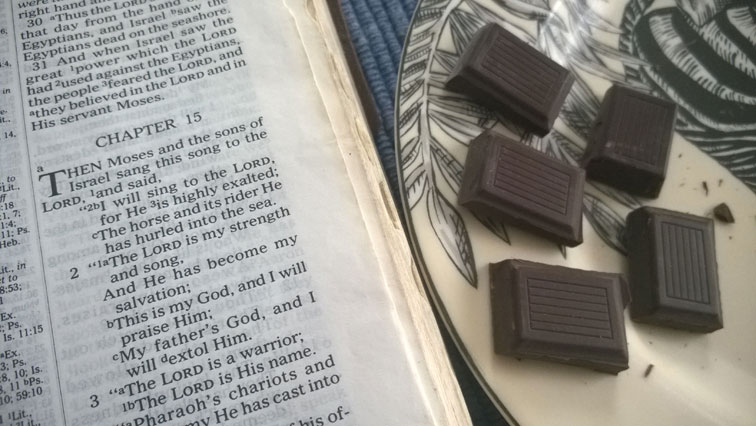 So, I was googling around for information on the song in Exodus 15, trying to think up an introduction for today’s post, when I happened to play the song “When You Believe” from The Prince of Egypt. I suddenly found myself crying over the song’s duet and its picture of faith. Twenty years ago, I loved the song, but considered its contrast between faith and rationality overwrought; now, I’ve kind of come around to it. Trust in God doesn’t always make sense to us, yet here I am, like Miriam and Zipporah, seeking faith and speaking words I never thought I’d say. And as I listened to the song and read the Hebrew lyrics of the bridge, taken from Exodus 15, I laughed out loud through my tears. Of course they didn’t include lines like “Pharaoh’s chariots and his army He has cast into the sea” (15:4) and “You send forth Your burning anger, and it consumes them as chaff!” (15:7) Can you imagine a DreamWorks movie with such a celebration of–to put it as tactfully as possible–retributive justice? Now that would be a real miracle.

But yes, Exodus 15 contains a song, the first song presented in the Bible. And yes, it’s a song about God conquering and drowning his enemies. These enemies oppressed and threatened the lives of his people, a people who, when cornered on the other edge of the sea, sarcastically asked Moses, “Is it because there were no graves in Egypt that you have taken us away to die in the wilderness?” (14:11). They had lost all hope of surviving. They despaired. But, at least at times like this, the Bible is a book where people who despair win.

The Prince of Egypt has Miriam, Zipporah, and then the people of Israel singing “When You Believe” together as they leave Egypt and the Red Sea behind, for dramatic effect. But somehow I doubt the people spontaneously burst into song immediately after escaping Pharaoh. I wonder: what did this song originally sound like? Who wrote it? Perhaps it was Moses; his acquaintance with music certainly isn’t limited to singing this song (cf. Deuteronomy 32, Psalm 90). Perhaps it was someone else.

Perhaps it was his sister Miriam. We first learn her name here, in the context of the song, where she leads the women in a celebratory dance using timbrels (a tambourine-like instrument) and echoes the first line of the song: “Sing to the Lord, for He is highly exalted; the horse and his rider He has hurled into the sea” (15:21). Miriam is identified as a “prophetess” (15:20), the feminine of the term applied to both Moses and Aaron. All three siblings have made a vocation out of conveying the voice of God, and here they do it with song.

But often the highs have their corresponding lows, and here is no exception. The song ends, the contingent of Israelites finds nothing but bitter water at Marah, and the people complain for Moses to fix the problem. I suppose we could have ended the chapter at verse twenty-one, but traditionally we don’t, and the fact remains that we’ll have to go through the complaints and the bitter waters if we’re going to finish Exodus, much less the Pentateuch. We’re at the point where we have to leave behind the inspirational musical numbers of The Prince of Egypt and venture forward into less animated territory. Welcome to the wilderness.