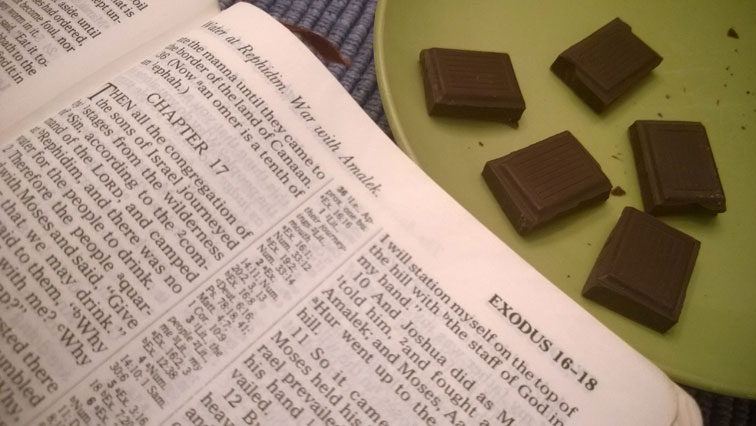 I suppose it’s time for me to start thinking of the passages surrounding Exodus 16 as Complaint Central. Previously, it hadn’t really clicked for me that the Israelites begin griping almost as soon as Moses and Miriam have finished leading the people in their triumphant Song of the Sea. Nor had it registered that manna, the magic sky bread, came as God’s response to more griping. Then, in today’s chapter, Israel continues griping. There’s something about writing about these passages, not just reading them or even merely reflecting on them, that draws one’s attention to these patterns. So: welcome to our last stop at Complaint Central, at least for the time being.

Today the people have returned to griping about the lack of water. This time, though, they escalate their fuss. They come to Moses demanding water, and when he asks why they’re being so contentious, they deploy a familiar line: “Why, now, have you brought us up from Egypt, to kill us and our children and our livestock with thirst?” (3). Just like they did before the manna, they doubt that God will keep his promises to them and their forefathers. They really think he’s going to let them die of dehydration in the desert.

And just like with the manna, God gives them what they want, even though they’re not asking nicely. At Mount Horeb, God has him hit a rock with his staff, and then water flows out from the rock. There’s their answer to the question “Is the Lord among us, or not?” (7). He is, and he’s meeting the needs of his people, through the same staff Moses hit the Nile with when God turned it to blood. I don’t think the instruction to strike the rock implies any impatience or anger on God or Moses’ part. It’s simply a callback to another time Moses struck with his staff and water was involved. The God who freed his children will ensure their survival in the desert.

The chapter has a second scene, in which the nation of Amalek attacks Israel. Like Israel, Amalek takes its name from its progenitor, Amalek, a son of Esau by his concubine Timna (Genesis 36:12). But God preserves his people through Amalek’s attacks, and this time they have no complaints (perhaps because they’re too busy fighting for their lives to gripe).

And here we are introduced for the first time to Joshua. By way of introduction, the text tells us: “So Moses said to Joshua, ‘Choose men for us and go out, fight against Amalek’” (9). And that’s it. As we read on, Joshua does some other things, such as fight against Amalek, and act as a witness to God’s declaration that he will “utterly blot out the memory of Amalek from under heaven” (14). And that’s hilarious! God has Moses write down that he will erase all memory of the people of Amalek. I love it, and I love Joshua’s introduction too.

If we wish to find out more about Joshua, we will have to keep reading until he shows up again, so that is precisely what we will do.