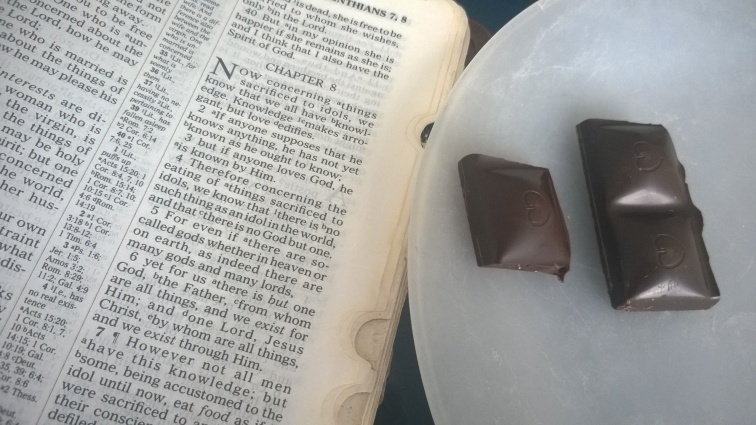 Hoo boy. You can add one more can to the ever-growing opened-can-o’-worms pile that Paul’s accumulating, because today we’ve got that super-controversial topic of food sacrificed to idols! Boy, all you 21st-century American Christians who have been sacrificing meat to Zeus and Molech, has Paul got some words for you!

In all seriousness, the material in here concerning food sacrificed to idols is about as culturally relevant to most of us as the verses in Deuteronomy about what to do with your oxen. The modern world seems to have taken Paul’s words to heart that “there is no such thing as an idol in the world” (4); whatever deities we may worship in the western world, we no longer craft and venerate statues intended to embody our gods, much less burn meat dedicated to them.

But there’s still a principle here that we can learn from. Paul’s teaching is that while Christians shouldn’t devote themselves or their food to the worthless, made-up pagan non-entities that idols represent, they shouldn’t worry either about eating food that someone else has sacrificed to an idol. But he adds: “But take care that this liberty of yours does not somehow become a stumbling block to the weak” (9). He presents the scenario where a new, naive Christian sees one of his brothers eating in an idol’s temple and assumes these things are fine to participate in–say, that it’s okay to worship the whole Greek pantheon, or angels, or the Roman emperor, as long as you also worship the Christian God. And Paul responds: that’s not okay. Abusing your freedom for selfish reasons and being inconsiderate of your less mature brothers’ consciences is a sin against them and against Jesus Christ.

And you can imagine other scenarios where the principle might apply. Replace the temple with a modern-day bar, and imagine the things that might go through a fellow Christian’s head if they see you having a few drinks on a Friday night. In a lot of ways, alcohol is one of the gods of our world, with its own cults and devotees, not quite a Zeus but certainly a Poseidon. And I’m not saying to refrain from drinking alcohol entirely, though that’s a viable and wise stance, and if you sense that God has led you to go dry, then do it. What I’m saying is don’t worship alcohol, and moreover don’t abuse your freedom to drink or not drink alcohol. Peter puts it this way: “Act as free men, and do not use your freedom as a covering for evil, but use it as bondslaves of God” (1 Peter 2:16). In Christ, God sets us free from sin, but he also calls us into this community of brothers and sisters who are all at different places, growing in different ways. We need to be considerate of these people. Paul applies the principle to his world and culture, but the principle is broader than one world and one culture. It’s not just about idolatry: it’s about putting your freedom to good use. It’s about freedom in the family.