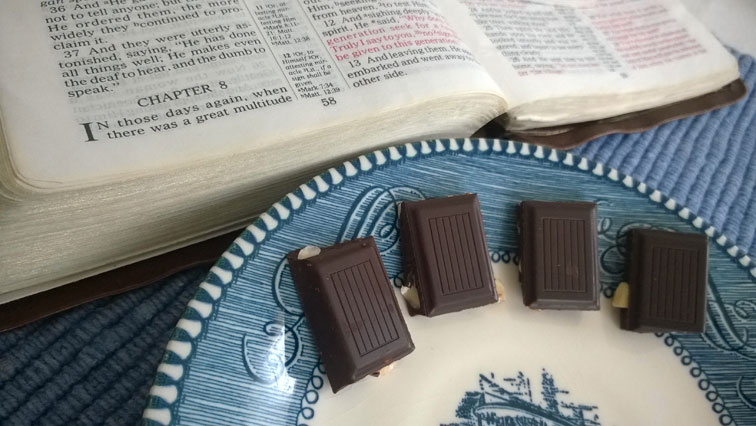 What is bread? The question has hounded philosophers and theologians for centuries. Many have speculated and pontificated on the nature and meaning of bread, but even today, with our marvels of modern technology, the truth about bread eludes us. Its mysteries–okay, no. Bread has been around for ages and we know what it is.

You may have noticed bread showing up periodically through the gospel of Mark. It first appears in a debate with the Pharisees over the Sabbath, where Jesus mentions the temple’s consecrated bread (2:23-28). As Jesus sends out his disciples, he instructs them not to take any bread with them (6:8). Bread is what you wash your hands before eating, according to the Pharisees (7:1-5), and just yesterday we saw bread as food for dogs and children in the extended metaphor from the exchange between Jesus and the Syrophoenician woman.

But, to finally get to the point and start talking about today’s passage, it was just a few pages back that Jesus fed a crowd of over five thousand with just five loaves and two fish, and today, he feeds a crowd of about four thousand with a similarly inordinately-small amount of bread.

This time, though, Jesus drops some cryptic wisdom after the event. The Pharisees are demanding a sign from him, and he refuses them, crossing the Sea of Galilee in exasperation. Apparently, he and the disciples leave in a hurry, because no one remembers to get bread for the trip. Jesus warns them, “Beware of the leaven of the Pharisees and the leaven of Herod” (8:15). They start talking about how they don’t have any bread, and Jesus, incredulous, asks in so many words if they don’t understand the meaning of bread. “Having eyes, do you not see? And having ears, do you not hear?” (8:18) he inquires, drawing on prophetic tradition to…chastise them? Rebuke them? Because, apparently, to them has not been given this particular mystery of the kingdom of God?

So, of course, Jesus rectifies their ignorance by not telling them what is the deal with bread. He cryptically asks them how many baskets of leftover bread remained after each feeding incident, then remarks, “You still don’t get it?” (8:21, Contemporary Jackson Ferrell Version). And that’s the end of the conversation.

Honestly, I don’t understand the meaning of the bread either. I’m not keen on mysticism and numerology, in part because it can be manipulated to support nearly anything whatsoever. But there’s no avoiding that the Bible uses numbers symbolically in parts, numbers like seven and twelve, the quantities of leftover baskets from each miracle of feeding. I’ll have to do my homework in order to figure this one out.

Jesus didn’t give any easy answers here, not to the disciples and not to us. Discerning the significance of bread will be left as an exercise for the reader.